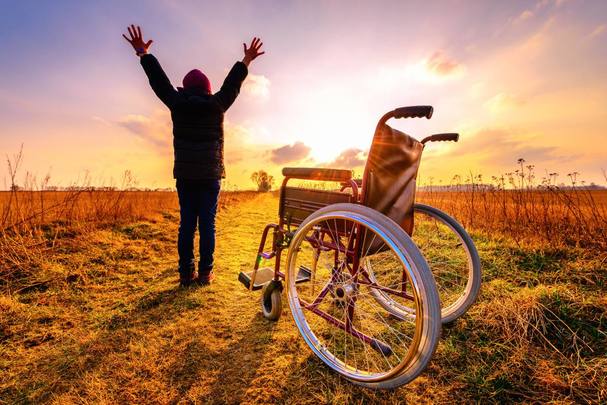 For 30 years Marion Carroll has been campaigning to have her miracle at the Knock Shrine, in County Mayo recognized. Thirty years later, the Bishop of Ardagh and Clonmacnois Francis Duffy has admitted that Carroll's inexplicable recovery "defies medical explanation."

Carroll, from Athlone, in County Westmeath, was in her late 30s when she traveled the Knock Shrine, a popular Catholic pilgrimage site. At the time Carroll was in a wheelchair, incontinent, blind in one eye and only partially sighted in the other.

In her book, about the healing, Carroll, wrote that her muscles were wasted, her throat and speech were severely affected

In September 1989 she prayed to the Virgin Mary. Carroll had come to the Anointing of the Sick in the Basilica, in Knock, against medical advice. That very day she stepped, pain-free, from her stretcher.

The Shrine at Knock.

In her book, I was cured at Knock,  Carroll described the experience. She said she remembers getting this "this beautiful, magnificent feeling telling me that if the stretcher was opened I could get up and walk."

"I recognize that Marion was healed from her long-standing illness while on pilgrimage in this sacred place.

"Marion's healing is life-changing. Many have attested to the dramatic change that came about in Marion here and on her return to Athlone in 1989.

"Today the Church formally acknowledges that this healing does not admit of any medical explanation and joins in prayer, praise, and thanksgiving to God.

"In these situations the Church must always be very cautious. This is illustrated by the fact that 30 years have elapsed since this took place, during which time the examination by the Medical Bureau (at the Knock shrine) testifies that there is no medical explanation for this healing."

The Head of the Medical Bureau at the Knock shrine, Dr. Diarmuid Murray, told RTÉ News that no definite diagnosis of her condition was available.

After decades of campaigning for recognition Carroll's file was reviewed in her presence last January. On Monday Bishop Duffy announced to the congregation at Knock, which included Carrol, her husband Jimmy, and Archbishop Michael Neary of Tuam that "there was a healing, a cure of the illness that beset Marion for several years".

Today’s announcement is an official recognition by the church of Marion Carroll’s healing at Knock Shrine.
”A healing for which there is no medical explanation” pic.twitter.com/efs8U2Gi6p

In 2014, Carroll was interviewed for a documentary called Apparitions. She explained what had happened after she attended the Anointing.

She realized what had happened but, she said, she didn’t know what to do.

“I didn't say anything in case I looked stupid. When I got back to St. John's-the rest home for the sick at Knock, I asked for the stretcher to be opened and I was able to stand up and I even drank a cup of tea unaided. There was no stiffness and no pain, it was like experiencing every bit of happiness you have ever dreamed of", Carroll said.

Marion now spends her time helping in the Church and speaking to those who feel in need of divine aid. She joked “When you work for the lord you’re given a mop and a bucket. So that’s what I do for him.”

In her autobiography, she wrote, “I meet a lot of people who tell me that they had this or that experience with our Lord and I tell them ‘That’s beautiful but that’s a gift to you. It doesn’t mean that you should go out and share it’.”

Here Marion talks to the Irish Catholic about her miraculous cure:

What do you think? Do you believe in miracles such as Marion Carroll's at Knock? Let us know in the comments section below.