Shoppers have “miracle” escape after car crashes into Dublin store

Customers were lucky to escape uninjured after a car crashed into a Skerries shop on Tuesday. 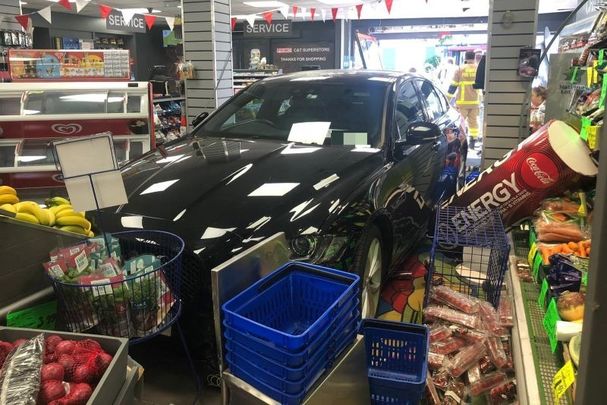 The shop’s owner holds “no ill will” towards the driver

Customers in a Dublin shop had a “miracle” escape after a car hopped the curb outside and crashed into the store's front windows on Tuesday.

Read More: On This Day: Douglas "Wrong Way" Corrigan "accidentally" flies to Dublin instead of California

The Journal reports that the incident occurred at the C&T Superstore on the Shenick Road in Skerries, North Dublin shortly after 2:30 pm on September 17.

Dave Morris, who was in the shop at the time of the accident, shared pictures and videos of the incident, adding that he “dodged a bullet:”

He travelled some distance into the shop, really scary stuff. Staff were amazing, and should be really proud of themselves how they managed the situation and thier customers in the aftermath. C&T Skerries. Big Thanks to @DFBAmbulance @GardaTraffic also for getting there so quick https://t.co/wW134NYg3j pic.twitter.com/fdtnnBSKzU

The Dublin Fire Brigade, who responded to the scene, also shared pictures of the aftermath:

Skerries firefighters & our Kilbarrack ambulance were called to a shop this afternoon after a car drove through the shopfront. The shop was open at the time & Gardaí also attended the scene #Dublin #fire #Fingal pic.twitter.com/Xip1gW7D0B

The following day, The Irish Sun reported that John Fanning, a man local to the area, was named as the driver of the car.

“It was just an accident," Fanning said, "the foot slipped on the accelerator, that’s all.

Fanning added: “I only live down here, I could have walked up. I was going for a sandwich. I only live 20 doors down.”

Fanning reportedly purchased a pack of cigarettes in the shop after the crash.

Tom Stafford, the shop’s owner, also told The Irish Sun: “It is unbelievable what happened.

“The car came through the shop front, right into the middle of the shop. There are parking bays outside the shop and in he came in.

“It really is a miracle no one was injured. I would say it is a blessing no one was hurt, a great escape really.”

Stafford, who said there is only cosmetic damage to his shop and not structural, said of Fanning:  “He’s a good customer of ours, there’s no ill will there. John and his mum would be good customers of ours."