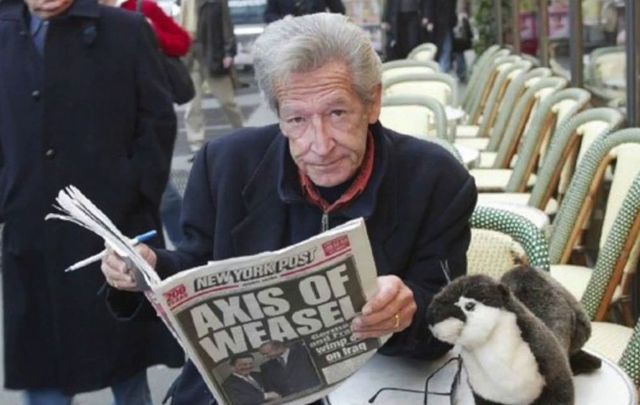 Steve Dunleavy was among the best-known tabloid writers in America in his day and pulled off some major scoops. He was a dear friend of cops and firemen and intensely proud of his Irish roots.

He was perhaps the most famous tabloid journalist in New York in the years circa 1975 to 2010 or so and wrote many of his scoops sitting at the bar in his favorite Irish pub Langans in Midtown.

He was known to get the story at all costs.

"I lost count of the number of times I posed as a cop, a public servant or a funeral director," he told his long-time employer Rupert Murdoch's biographer William Shawcross.

Murdoch, who Dunleavy always called 'The Boss', told the same author, "He's one of the hardest-working journalists I've ever seen. He absolutely lives for scoops and to get his name on them."

The Washington Post's TV critic called Dunleavy 'a sleaze' and The New York Times described the show as 'nothing short of vile. Dunleavy reveled in the name calling.

Steve, or to his friends, “mate,” exemplified the surfeit of wanderlust consistent with his Irish heritage.  At the age of 15, convinced he had mastered the basic rules of English grammar, quit school and set off to become a reporter.

The entry-level position at Sydney’s “Daily Mirror” was that of a copy boy, stapling five pieces of carbon paper between white paper for the reporter’s use on a manual typewriter.  The job required that young Steve wear a suit, which aged him well enough so that he could spend a few of his hard-earned shillings on a pint or two at the local pub frequented by reporters.

If the “Mirror” provided Steve with his college degree then it was the pubs of Sydney that bestowed upon him his master’s in Journalism.  By age 16 he was covering the police beat.

Today adolescents are unduly coddled and could learn a thing or two from our fellow Irishman’s career path.  His overnight success to journalistic superstardom took some 24 years.  There was no instant gratification, but what a ride it was.  Steve crisscrossed the globe and amassed a contact list of who’s who.  John Wayne, Clint Eastwood, Sophia Loren, Roman Polanski, Roy Cohen, Ann Margret, Fidel Castro, Donald Trump, to name a few.  But again those are his stories to share.

It was 1967 when Steve set permanent roots in New York.  The times were tumultuous, but there was a perfect storm brewing.  By 1977, benign neglect had catapulted New York City into the throes of a fiscal crisis, crime was rampant and lifelong New Yorkers were fleeing en masse.  Add to this toxic mix a blackout and serial killer and it’s all the more reason New Yorkers longed for or perhaps needed something new and energetic.   Steve was more than willing to fill the void.

Having just completed an expose′ on the world’s biggest entertainer, Elvis Presley, Steve was up for the challenge for all the madness New York could dish out.

The book “Elvis, What Happened?” was no small feat; Steve got the exclusive from three of Presley’s confidants.  This was the first time anyone publicly profiled Elvis in a manner contrary to the wishes of his manager.

The way in which Steve exposed Elvis’ frailties would have modern day head shrinks seeing dollar signs.  Unfortunately, the unintended consequence of this book may have been too much for the shy, humble country boy from Tupelo, Mississippi to handle.  On August 16, 1977, Elvis Presley, having obtained an advance galley some two weeks earlier, died on the day of the book’s release.  For the first time in his career, Elvis took second billing.  It was now Steve’s headline, “Dunleavy’s book: Did it kill Elvis?”

Far away from Elvis’ Memphis, New York -- fresh off the blackout riots, which became a national model of uncivil disobedience -- was dealing with a homegrown serial killer, David Berkowitz, a.k.a., “The Son of Sam.”  Berkowitz had been recently arrested and competing against Presley for space on the Front Page of New York’s dailies.

The “Son of Sam” story was owned by another Irishman, Jimmy Breslin.   Breslin, a legend in his own right, was a product of New York City and thus may have had the edge.  But Dunleavy, perhaps inspired by his new insight into the wholesome days of Elvis, the kid from Memphis who in 1956, without any formal musical education, owned the New York media with his appearances on the Ed Sullivan Show.

The Dunleavy – Breslin matchup resulted in some of New York’s best daily histrionics, requiring a scorecard to determine which reporter had bested the other.  The final tally was unimportant; New Yorkers welcomed a respite from the madness the Big Apple had become.  The competition forever changed the model of print news in New York.  However, the Presley and Berkowitz stories put Steve in the enviable position of competing against himself for space on the front page.

This competitive spirit was not to be outdone by a pennant chase in the Bronx.  What Steve had become to the world of NY print media Billy Martin was to NY baseball.   During game 2 of the 1977 World Series, the camera captured a 5 alarm blaze a few blocks from the stadium.  Living rooms throughout America now had a visual of the gravamen of New York life in that era.

The Yankees went on to win the ’77 series and Martin and Dunleavy became fast friends.  It seemed only natural since both rose to the top of their professions in an unapologetic way and were frustrated by the manner in which others had bastardized the fundamentals of their chosen careers.

For a period in the 1980s – 1990s Steve took his bold style of reporting into American homes via the hit show, “A Current Affair.”  Despite having never lost his Australian accent Steve won an Emmy Award further solidifying his kinship for his adopted America.

In  1995, after a highly successful run on TV, “Mr. Blood and Guts” once again returned to the streets as a reporter.  Until his retirement in 2008, Steve was a permanent fixture reporting on cops and firefighters. With Steve’s exit into private life so too have departed the loyal cops, firefighters and their families who would gladly plunk down a few coins each morning to see what Dunleavy had to share with his loyal minions.

He was beloved by cops and firemen always standing up for them and he can expect a spectacular goodbye from New York’s finest and New York’s bravest.

Here the legendary journalist talks about his Irish roots:

Read more: How Jimmy Breslin and Pete Hamill defined their own times and challenge our current one