"Truth be told, the late newspaper columnist Jimmy Breslin was not the nicest guy in the world... but boy, could he write." 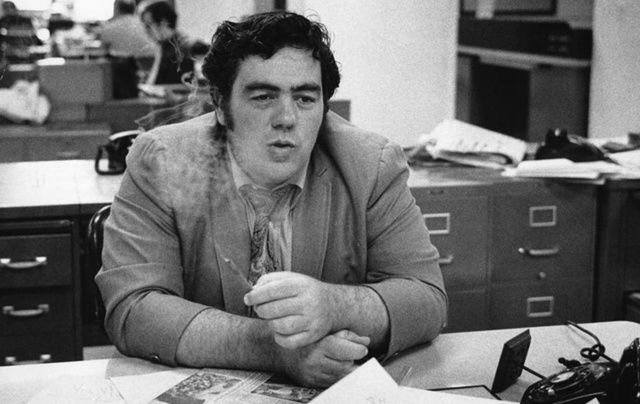 Truth be told, the late newspaper columnist Jimmy Breslin was not the nicest guy in the world.  A grumpy old uncle might be the kindest description of him, but boy, could he write.

When he was asked to contribute an interview to an Irish American writer’s PBS series Breslin insisted in interviewing himself. He was by no means modest, our Jimmy.

The last time I saw him was a few years back on the sidelines at the St Pat’s for All parade in Queens, organized by the Lavender and Green LGBT group. True to his instincts Breslin was standing with the little guys in their battle against being kept out of the big parade in Manhattan.

“Their day will come,” he said to me as they walked past.

As usual, he was prescient. Jimmy could see the future.

No one wrote better.  As columnist Kevin Cullen, another Breslin devotee, wrote in the Boston Globe, Breslin never wrote the Queen’s English but the English of Queens, the hardscrabble neighborhood of Ozone Park in the outer borough, near Aqueduct racetrack where so many of his characters hung out and where Breslin grew up fatherless.

A phone call from Breslin was a celebrated event, and I got a few over the years. It was usually questions followed by series of grunts while you tried to fill him in, in my case usually about war and peace in Northern Ireland. Then an abrupt hang-up.

He had lived in Northern Ireland in 1970 researching a book and saw the advent of The Troubles first hand.  When Mayor Richard Daley was putting down protests in Chicago at the Democratic National Convention there in 1968, Breslin wrote of the police violence just beginning against civil rights demonstrators in the North.

Breslin, writing about Irish American cops who were accused of brutal tactics against the black Chicago protestors, said, “It is of particular interest in this country where Irish Catholics always can be found clubbing and ridiculing Negroes...the RUC’s attacks should remind Daley of something. There is nothing more discouraging than people who forget where they came from.”

There are many who would say Breslin’s words resonate today just as much.

From the 1970s on Breslin became every Irish American writer’s idol. It is stunning to recount how many he influenced.

Pete Hamill, Jim Dwyer, Dan Barry, Kevin Cullen, Mike McAlary, Michael Daly, Jim Mulvaney, Dennis Duggan, Denis Hamill … the list went on and one, all inspired in some way by Breslin, the King of Queens.  Hamill, himself ailing, stated it felt like “50 people just left the room” when Breslin passed.

But it wasn’t just men he inspired.  There were the female columnists, Maureen Dowd, Anna Quindlen, Gail Collins, a golden era of Irish talent led by Breslin.

Breslin was the last of the shoe leather generation. He never even drove a car, preferring to arrive on foot or in a cab.

In an age where preening journalists rarely leave their desks and form a perfect echo chamber around themselves, Breslin’s information gathering stood out. No one was too small or too removed from the story.  The Kennedy grave digger, the losing locker room, the incidental characters that New York threw up all came center stage.

In the ultimate backhanded comment serial killer David Berkowitz, Son of Sam, reached out to Breslin when he made human contact. He knew Jimmy knew the score.

Now we all do.