Dr. Anthony Fauci is among the honorees for this year's 2020 Ripple of Hope Awards presented by Robert F. Kennedy Human Rights. 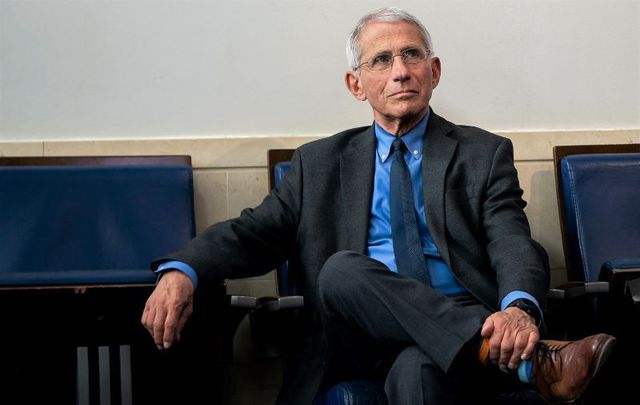 The Ripple of Hope Awards ceremony will be presented virtually in December.

The honorees for the prestigious Ripple of Hope Awards have been announced by Robert F. Kennedy Human Rights to include Dr. Anthony Fauci, Dolores Huerta, Colin Kaepernick, Dan Schulman, and Dan Springer.

Kerry Kennedy, the president of Robert F. Kennedy Human Rights and the daughter of the late Senator Robert F. Kennedy, said this week: “Our country is yearning for leadership, for moral fortitude, for common decency and kindness, and this year’s Ripple of Hope laureates give us great hope for the future.

“Their work for equal justice touches every corner of society, sometimes at great personal cost. We are deeply honored to celebrate these changemakers, who have set forth countless ripples of hope at a time when our world is in such need of inspiration.”

According to the organization, “The annual Robert F. Kennedy Ripple of Hope Award celebrates outstanding leaders who have demonstrated a commitment to social change, recognizing individuals across government, business, advocacy, and entertainment who have utilized their platform for the public good.

“At a time when the courageous pursuit of equality and justice has become political and riddled with adversity, Robert F. Kennedy Human Rights stands with these modern-day human rights defenders in their inspirational fight for progress.”

The inspiration for the Ripple of Hope Award comes from Robert F. Kennedy’s most famous speech in 1966 when he visited South Africa during the worst years of apartheid:

"Each time a person stands up for an ideal, or acts to improve the lot of others, or strikes out against injustice, they send forth a tiny ripple of hope, and crossing each other from a million different centers of energy and daring, those ripples build a current which can sweep down the mightiest walls of oppression and resistance.”

The 2020 Ripple of Hope Awards honorees:

Dr. Anthony Fauci, director of the National Institute of Allergy and Infectious Diseases:

As our world continues to confront #COVID19, Dr. Anthony Fauci leads the country’s response with insight and grace. The U.S.’ top infectious disease expert, and director of @NIAIDNews, Fauci is our trusted north star, guiding the nation through its greatest public health crisis. pic.twitter.com/Dv3K4ujqoG

Dolores Huerta, founder and president of the Dolores Huerta Foundation and co-founder of United Farm Workers of America:

.@DoloresHuerta is on a lifelong mission to vanquish the injustices faced by so many essential workers. Alongside César Chávez, she fought for farmworkers, co-founding @UFWupdates in 1962, and today empowers the next generation of grassroots organizers through @DoloresHuertaFD. pic.twitter.com/SXlarSZQf9

In the face of extreme opposition, @Kaepernick7 sacrificed his dream of playing professional football to speak truth to power. He continues his essential work with our partners at @yourrightscamp. Together, we’ve committed $1 million to our Funds for Freedom efforts. pic.twitter.com/dpvRm332BY

Guided by a core belief in social activism, CEO @Dan_Schulman is dedicated to democratizing payments and closing wage gaps at @PayPal. His leadership demonstrates that standing for economic equality and #workplacedignity creates a diverse workplace where all can thrive. pic.twitter.com/M65TqnKHNO

As CEO of @DocuSign, @DanDSpringer is helping to take the world’s agreements digital—a giant step in preserving the world’s forests, all while increasing our productivity. The company’s IMPACT group also aims to protect the environment for generations to come. pic.twitter.com/BmE8BzLNgt

The awards ceremony, which is typically an in-person gala, will be hosted virtually on Thursday, December 10 in honor of National Human Rights Day when the United Nations General Assembly adopted the Universal Declaration of Human Rights.