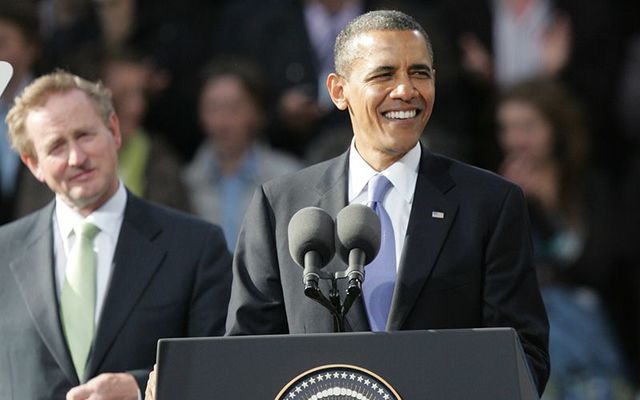 "My father believed; 'Each time a man stands up for an ideal, or acts to improve the lot of others, or strikes out against injustice, he sends forth a tiny ripple of hope," said Robert F. Kennedy Human Rights President Kerry Kennedy.

"On the 50th anniversary of his historic campaign for the White House, we honor laureates who have sent forth countless ripples of hope to millions of people inspired by their example."

“Bobby Kennedy was one of my heroes,” said President Obama.

“I first got into public service because I wanted to be a part of something bigger than myself, believing that my own salvation was bound up with the salvation of others.  That’s something he expressed far better than I ever could when he talked about the power that comes from acting on our ideals, those ripples of hope that can ‘sweep down the mightiest walls of oppression and resistance.’  That’s what I’m determined to help inspire and cultivate over the rest of my career – the idea that anybody can be one of the millions of acts of conscience and voices raised against injustice, the idea that anybody can be one of the ‘million different centers of energy and daring’ who, like Bobby Kennedy, have always changed the world for the better.”

Robert F. Kennedy Human Rights founder Ethel Kennedy will award the Laureates during the annual Ripple of Hope Gala at the New York Hilton, in Midtown Manhattan, on Dec 12, 2018.

“For a half-century, the legacy of Robert F. Kennedy has been a model for public service based on the simple premise that our highest calling is to leave is a more understanding and inclusive world for future generations,” said New Jersey Governor Phil Murphy.

“This is exactly the New Jersey I am working to create – a state that is strong and fair, which welcomes and embraces diversity, and ensures greater educational and economic opportunities for all. To have these efforts recognized, and linked to the legacy of Senator Kennedy, one of my personal heroes, is a tremendous honor.”

Discovery President & CEO, David Zaslav said “I’m greatly honored to be recognized as a 2018 Ripple of Hope laureate alongside this fantastic group of individuals who are committed to positive social change and carrying forward the legacy of Robert F. Kennedy.”

He added “Discovery is committed to informing, inspiring and educating its global viewers with deeply loved content and to making a difference for our planet and local communities around the world. I look forward to our continued journey together to do well by doing good.”

Bruce D. Broussard, CEO of Humana, said "I'm honored to receive the Ripple of Hope Award.  Robert F. Kennedy inspired our nation to rededicate itself to social and economic justice for all Americans, and that critical work continues today.  As CEO of Humana, I’ve committed our company to improving the health of our communities, particularly for older Americans. Access to quality health care is essential if we are to achieve the kind of world that Senator Kennedy dreamed of, and while our work is not done, every day we're making progress toward that goal."

Following his roles as a community organizer, constitutional law professor, and U.S. Senator, Obama was elected President in 2008, taking office at a moment of crisis unlike any America had seen in decades. His leadership helped rescue the economy, revitalize the American auto industry, reform the healthcare system to cover another twenty million Americans, and put the country on a firm course to a clean energy future – all while overseeing the longest stretch of job creation in American history.

On the world stage, Obama’s belief in America’s indispensable leadership helped wind down the wars in Iraq and Afghanistan, decimate al Qaeda and eliminate the world’s most wanted terrorists, shut down Iran’s nuclear weapons program, open up a new chapter with the people of Cuba, and unite humanity in coordinated action to combat a changing climate.

In his post-presidency, President Obama remains committed to lifting up the next generation of leaders through his work with the Obama Foundation.

David Zaslav joined Discovery as President and Chief Executive Officer in 2007, leading the company’s initial public offering and ascension as a Fortune 500 company.  Under Zaslav, Discovery launched some of its most successful channels, including Investigation Discovery and OWN, in partnership with Oprah Winfrey. Zaslav is credited with expanding and diversifying Discovery’s global footprint through acquisitions including European sports leader Eurosport, which under Zaslav became home to the Olympic Games in Europe, and Scripps Networks Interactive, in a deal creating a new global leader in real life entertainment.  Most recently, Zaslav led Discovery’s strategic alliance with PGA TOUR to create a new global home of golf.

Zaslav’s business accomplishments at Discovery are matched by his commitment to social good. Under his leadership, Discovery launched its corporate social responsibility arm, “Discovery Impact,” created Project C.A.T. (Conserving Acres for Tigers), a global effort with World Wildlife Foundation to help double the world’s wild tiger population by 2022 and is now bringing stories of human rights defenders into classrooms across the country through a comprehensive partnership between Discovery Education and Robert F. Kennedy Human Rights’ Speak Truth to Power program.

Bruce D. Broussard was selected as CEO of Humana in 2013 following his years of executive financial and operations leadership that allowed him to improve health access for individuals in need of care in areas such as oncology, assisted living/senior housing, home care, and dental treatments.  Bruce has championed an integrated care delivery model that is expected to drive down patient costs, enhance treatment quality, and improve outcomes.

New Jersey Governor Phil Murphy is committed to creating a stronger state economy based on principles of fairness and justice. Since taking office in January 2018, Governor Murphy has enacted the nation’s strongest equal pay law, strengthened voting rights, and acted to support New Jersey’s immigrant communities and protect the health care of residents, among other measures. Prior to running for office, Governor Murphy represented the United States as Ambassador to the Federal Republic of Germany under President Barack Obama. Gov. Murphy has served on numerous non-profit boards and has led a national task force on the future of education.