Rhasidat Adeleke, an Irish sprinter on the University of Texas Track and Field Team, set a new Irish indoor 200m record in New Mexico on January 21. 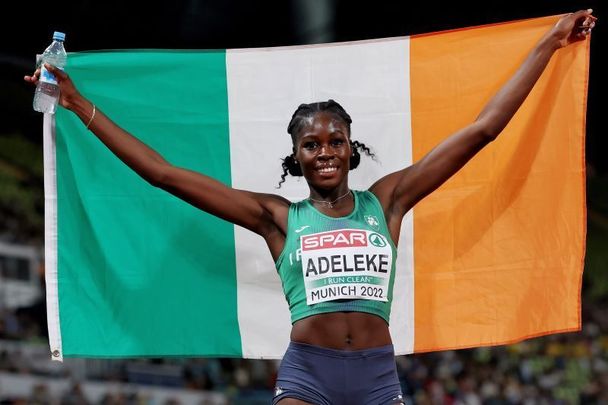 August 17, 2022: Rhasidat Adeleke of Ireland celebrates following the Women's 400m Final during the Athletics competition on day 7 of the European Championships Munich 2022 at Olympiapark in Munich, Germany. Getty Images

Adeleke, the 20-year-old native of Dublin who is a member of the University of Texas Track and Field team, "made her mark" at Saturday's invitational.

Athletics Ireland noted that Adeleke’s winning time was more than three-tenths of a second faster than her previous record of 22.85, set in Albuquerque last February. It also moves her to 25th on the World all-time 200m list indoors.

Adeleke's record-setting 200m run was also the fourth-fastest time in the history of the University of Texas.

Her performance saw her cross the finish line well ahead of her teammate Julien Alfred, who finished second with a time of 22.71.

🌍 LEAD! @rhasidatadeleke wins the 200m with her time of 22.52! She’s now the No. 3 performer in UT history with the 4th-fastest performance.

Adeleke only opened her indoor season last weekend with a winning performance in the 4x400m relay at the Cardinal Classic Meeting at the University of Louisville in Kentucky.

Last August, Adeleke set an Irish record of 50.53 as she finished fifth in the 400m final at the European Athletics Championships in Munich, Germany.

She is now looking ahead to the NCAA Championships on March 10/11 and will aim to break the Irish indoor 400m record of 51.58, which was set by Karen Shinkins 21 years ago.