Israel Olatunde is Ireland's new fastest man after breaking a long-held Irish record in the men's 100m final at the European Athletic Championships in Munich. 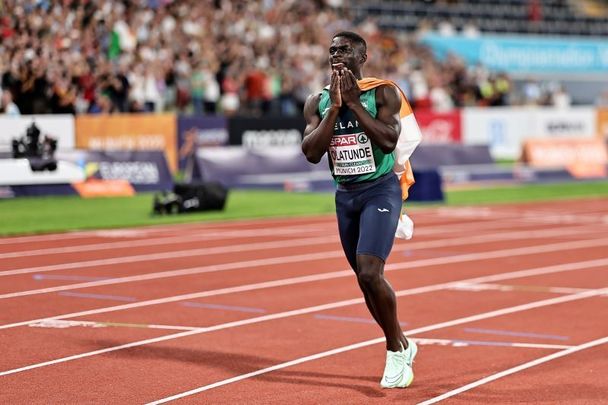 August 16, 2022: Israel Olatunde of Ireland celebrates after the Athletics - Men's 100m Final on day 6 of the European Championships Munich 2022 at Olympiapark in Munich, Germany. Getty Images

Israel Olatunde is now the fastest man in Ireland after setting a new record at the European Athletics Championships in Munich on Tuesday, August 16.

In doing so, the Irish sprinter also broke his own personal best of 10.19, which he had only set the night before when he won his heat in round one to progress to the men's 100m semi-finals.

Athletics Ireland noted that Olatunde's record-breaking performance in the final on Tuesday was all the more impressive considering that he had run a 10.20 semi-final an hour earlier.

The record-breaking run landed the Dundalk-born athlete in 6th place in the European Championships final on Tuesday night.

6th place in the European 100m final after coming in as the 21st fastest athlete.

What God blesses, no man can curse.

Grateful for the opportunity to represent my country proudly on a stage like this. pic.twitter.com/EZdpP4f3KN

"To be able to call myself the fastest man in Irish history is just amazing," Olatunde told RTÉ Sport on Tuesday night in Munich.

"To be here in a European final, finish sixth and get a national record, I just can’t believe it. I had no idea I ran that fast. It's a dream come true.

"The atmosphere was amazing, the crowd was amazing. These are the fastest guys in Europe and I’m up there with them. I’m so happy to be there and I know I can definitely improve so I’m looking forward to that.

"This whole season has just been such a blessing. I’m so grateful to be here.

"Thank you to my coach [Daniel Kilgallon], my training partners, my family, my community, everybody that has been supporting me and showing me so much love. It has pushed me on to get to this point."

Olatunde was emotional when he learned he is now Ireland's fastest man:

Olatunde’s championships is set to continue when the new Irish 100m record joins the men’s 4x100m team who go in the heats from 9 am on Friday, August 19.

Aside from his record-setting running career, Olatunde is set to enter his final year at University College Dublin this fall, where he is studying computer science.