Rhasidat Adeleke has run her way to become the latest Irish record breaker at this year's European Athletics Championships in Germany. 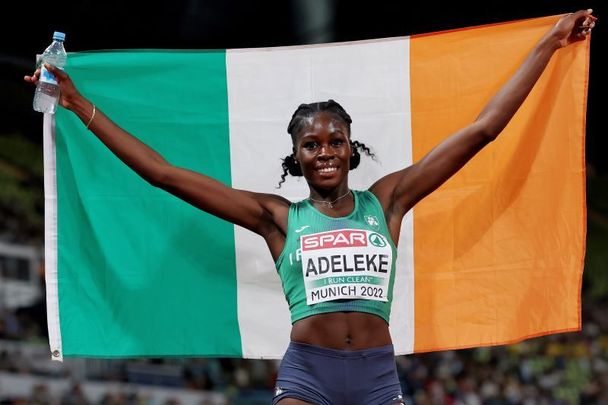 August 17, 2022: Rhasidat Adeleke of Ireland celebrates following the Women's 400m Final during the Athletics competition on day 7 of the European Championships Munich 2022 at Olympiapark in Munich, Germany. Getty Images

Irish sprinter Rhasidat Adeleke is the second Irish athlete to break an Irish record at this year’s European Athletic Championships in Munich, Germany.

The feat is particularly impressive considering the 400m is a relatively new event for Adeleke.

I can’t complain, I’m blessed to be here!🍀

Thank you to everyone supporting me and my journey🫶🏾

We’re not done yet! pic.twitter.com/nOhYgsyO0V

"I gave it all I had, it wasn't enough for a medal but I got a new national record so I'm happy," Adeke told RTÉ after her record-setting run on Wednesday.

"It's my first year doing the 400m, hopefully I'm going to start training for it this fall and let's see what I can next year.

"I wish I just had more in my legs for the last 50m. I was looking at the screen and thought 'oh my god I'm in a medal position' and feel like I shouldn't have done that because it threw me off a bit.

"Honestly I was really hoping for a medal but I have to consider everything, this is like my 50th race of the season.

"To come here and break the national record… so many people support us in Ireland and I just want to give them something back. Thank you for supporting me and thank you for rooting for me."

Adeleke intends to compete as part of the Irish 4x400m relay team on Friday, August 19 in what will be her 50th race of the season.

The talented Irish sprinter is heading into her junior year at the University of Texas in the US where she is studying economics and is on the track and field team.