Clare County Council has confirmed that it has put its recently commissioned ‘Púca of Ennistymon’ sculpture on hold following backlash from locals. 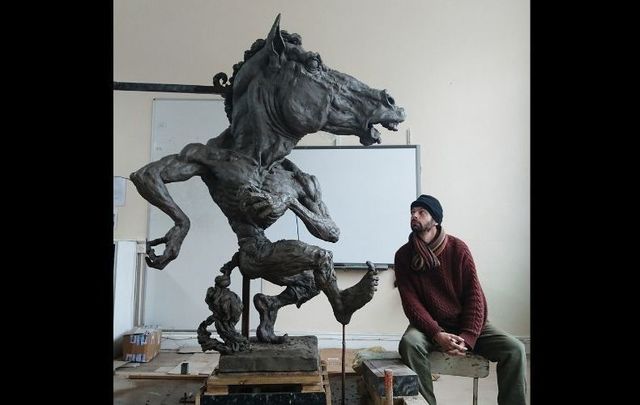 Sculptor Aidan Harte has shared with IrishCentral his thoughts about the controversy surrounding his 'Púca of Ennistymon' statue.

Harte told IrishCentral on Wednesday morning: "All I can say is that it matters what all the people of Clare think.

"A vocal minority seem to have been set against it from the start, and that culminated with the priest denouncing it from the altar as a pagan idol.

"That's silly; the Púca is no more pagan than the leprechaun.

"But since the controversy went national there's been a swing, with locals who like it now speaking up. That's welcome and I hope it goes ahead.

"The brief was to make a statue that would attract tourists to Ennistymon. The Púca hasn't even been put up yet and all Ireland is already talking about it!"

Clare County Council has paused the process of erecting a statue of a Púca, a mythical Irish creature, in Ennistymon following objections from locals.

The ‘Púca of Ennistymon’ sculpture was commissioned earlier this year as part of a capital project investment aimed at “increasing visitor dwell time" in the small Co Clare town. It was among 18 submissions that were reviewed by a panel of local adjudicators.

According to Clare County Council, ‘The Púca of Ennistymon’ is “inspired by Ennistymon’s equine heritage and Irish folklore.”

Dublin-based sculptor Aidan Harte shared a picture of his ‘The Púca of Ennistymon’ on Instagram on Tuesday:

In an earlier Instagram post, Harte describes the mythical Púca as: “Ireland's shapeshifting boogeyman likes to offer drunken travellers a ride home, on his back – no matter how long your taxi's taking this Christmas, don't even consider it.”

In light of “local objections,” however, Clare County Council has paused the process to erect the statue and will instead be initiating a “public engagement process.”

Fr Willie Cummins was amongst those who publicly objected to the Púca of Ennistymon statue. Fr Cummins - who, according to the Irish Independent, was celebrating mass in breach of health restrictions on Sunday, May 9 - told mass goers: “I fully object to this statue. There is something sinister behind it.”

Speaking outside the church after mass, Fr Cummins said: “It will never be erected - I can guarantee you. It looks nasty.”

Similarly, Fine Gael Senator Martin Conway, who lives in Ennistymon, said: “The Púca still puts the fear of God into old people and was a figure that was used to frighten people.

“The whole idea of putting a statue up to a fairy which has connotations to bad luck is inappropriate, disrespectful and offensive.

“The project should be stopped and abandoned.”

Ciara Fahey, a business owner in Ennistymon, told RTÉ: “It isn’t welcoming, it’s not warm, and it doesn’t reflect the community, its history, or its people or its culture.”

Sinead Garvey, another Ennistymon business owner, also told RTÉ: “We have loads of positive stories from our history here in north Clare and I don’t know if something big and black and dark with ‘púca’ written in stone is something that we’d be kind of feeling the love for.”

Clare County Council has been forced to "pause" plans to erect a controversial statue of a Púca in the town of Ennistymon, after widespread local criticism of the proposed piece that it was "grotesque and scary". | https://t.co/E9WQeHIqQA pic.twitter.com/Ea6Yw2y1EG

While there were local objections, there appear to be a few people jumping to adopt the on-pause project:

We'd find a home for them here in DLR. They look class.https://t.co/GISptt2nd4

This would look fantastic in either Marlay Park or Ferhill. If Clare don’t want this piece of art I’m sure @dlrcc could find this Púca a place!!! https://t.co/zp5Q2WqH5V

If Ennistymon doesn't want it, can we have it please? There are lots of púca stories from the boreens of Tipp. https://t.co/UKfsMMSLz1

hey @ennistymon if you don’t want the púca I’ll take it, I think it’s gas pic.twitter.com/FLFbeUyWlz