Hotel management removed the statues in light of the Black Lives Matter movement, believing that two of the statues were depictions of slave girls. 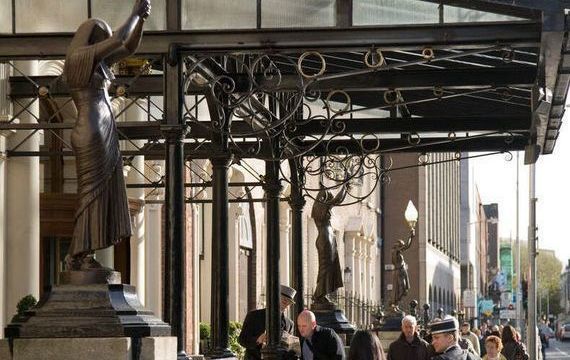 Three of the statues outside the Shelbourne Hotel in Dublin. Tourism Ireland

The owners of the Shelbourne Hotel in Dublin will reinstall four statues after controversially removing them earlier this summer in the mistaken belief that they were representations of slave girls.

The four statues had stood on plinths at the front of the hotel since 1867, but management removed them in July at the height of the Black Lives Matter movement when symbols all over the world came under renewed scrutiny due to potential links to slavery.

Kennedy Wilson, the US multinational property company that owns the Shelbourne, commissioned University College Dublin art historian Paula Murphy to determine whether the statues were depictions of slaves and she concluded that they were not, according to the Irish Times.

Furthermore, art historian Kyle Leyden pointed to the original catalog from which the statues were ordered from. He said that the catalog clearly labeled the statues as Egyptian and Nubian women and not as slaves.

The hotel faced intense criticism for removing the statues in July, with several people filing complaints with the Dublin City Council.

Several people argued that the facade of the hotel has been a protected structure since it was restored in 2016 and that removing the statues was a breach of planning permission.

Dublin City Council sent an enforcement letter to the hotel on July 29 giving it four weeks to respond to claims of an alleged planning breach. The council has since given the hotel a four-week extension to respond to the allegations.

Kennedy Wilson has now informed the council that it intends to return the statues to the original plinths as soon as they are cleaned.

Management will also install a plaque explaining the background of the four statues when they are reinstalled.