Dressed as handmaids, activists from ROSA handed the US Embassy in Dublin thank you letters from the Republic of Gilead for the new Texas abortion law. 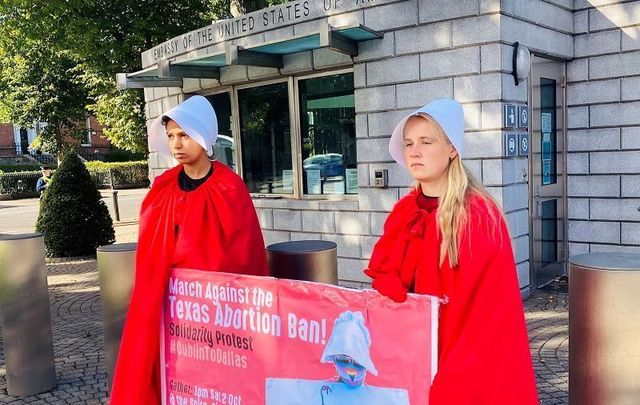 Protesters at the US Embassy in Dublin on September 28, 2021. @RosaWomen, Twitter

The Irish chapter of ROSA, an international group of socialist feminists against sexism, oppression, inequality, and capitalism, staged a demonstration at the US Embassy in Dublin today protesting the new Texas law banning abortion after six weeks of pregnancy.

Planned Parenthood in the US describes SB 8, the new Texas legislation also known as 'The Heartbeat Bill,' as "one of the most extreme abortion bans in the US.

"It would ban abortion in Texas at approximately six weeks — before most people even know they’re pregnant — with no exceptions for rape, sexual abuse, incest, and fetal anomaly diagnoses. For people with a regular menstrual cycle, that’s just two weeks after a missed period."

The bill came into effect in Texas on September 1.

In response to the new legislation, ROSA staged a protest in Dublin today where activists were “dressed as handmaids in symbolic street theatre, to lampoon the retrograde and misogynistic abortion ban in Texas," the group said in a statement.

Donning red capes and white caps, the "handmaids" handed a thank you letter for the Texas abortion ban from the Republic of Gilead to the US Embassy.

A spokesperson for the Irish group said: “The new Texas law encourages bounty-hunters by allowing ordinary citizens [to] win a  $10,000 prize for successful prosecution of anyone who ‘aid or abets’ or themselves accesses an abortion after six weeks.”

Tuesday’s demonstration, which falls on International Safe Abortion Day, comes ahead of a larger ‘Dublin to Dallas’ event that will take place this Saturday, October 2 at the Spire in Dublin in order to express “solidarity with the enormous women’s marches that will be happening across all states in the US that day in defence of abortion rights.”

Speaking at Tuesday’s demonstration at the US Embassy in Dublin, former TD Ruth Coppinger said: “What we want to say is that banning abortion won’t stop abortion, just like it didn’t in Ireland, it’s not going to stop it in Texas.

“Be under no illusion, if they get away with this, they’ll move on to other things like sex education, like contraception, and many other rights that women have.

She added: “It was a mass movement over a period of years that won abortion rights in Ireland led by women and young people and LGBT people. But it was also international solidarity and the shaming of the Irish government that had a role as well, so we’re doing the same today with regard to Texas.

“And it’s time for Biden and the Democrats to step up as well. They promised to uphold constitutional right to abortion. They need to act now.

“We’re also in support of the women’s marches that are going to be taking place all over, every 50 states in the US this Saturday.”

At the US Embassy highlighting solidarity protest on Saturday with those fighting dangerous ban on abortion in Texas
#DublintoDallas #TexasAbortionLaw #InternationalSafeAbortionDay pic.twitter.com/59aUgSRXD7