New project seeks to determine what Early Irish sounded like

The new project led by Royal Birmingham Conservatoire aims to "look at the sonic footprints of Vikings and Celts." 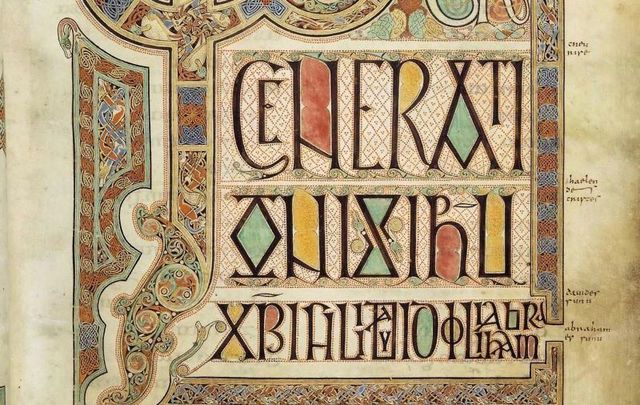 Folio 27r from the Lindisfarne Gospels in the Book of Kells, the world-famous Irish medieval manuscript. Public Domain

The two-year project will involve experts in Ireland, the UK, and Norway

A new project launched in the UK aims to give “new life” to the sounds of early medieval languages, including Early Irish and Old Norse.

Augmented Vocality: Recomposing the Sounds of Early Irish and Old Norse, led by experts at Royal Birmingham Conservatoire, part of Birmingham City University, will bring together music experts, historical linguistics, and literary scholars to look at the sonic footprints of Vikings and Celts.

A new project led by experts at RBC is giving extinct Viking and Irish languages new life through music.https://t.co/Sc9HG0PvTR pic.twitter.com/lYqTBqBd6X

The team, in collaboration with the Department of Anglo-Saxon, Norse and Celtic at the University of Cambridge, along with three European contemporary music ensembles, will apply powerful new vocal processing and live electronic music technology to develop new insights into the languages by reanimating surviving texts - before weaving sounds into new compositions for performance.

Birmingham Contemporary Music Group (BCMG) in England, Hard Rain Soloist Ensemble in Northern Ireland, and BIT20 Ensemble in Norway are also partner organizations for the project, which has just been awarded £485,274 (roughly $642k) in funding by the Arts and Humanities Research Council (AHRC).

Professor Lamberto Coccioli, Associate Principal of Royal Birmingham Conservatoire and project lead, said: "For many people, phrases such as 'the early medieval period' and 'the Viking age' conjure a mental landscape of swords, helmets, longboats, and thatched huts. It is a shared visual imagination that encompasses primary school projects, the historically-inspired fantasy world of Tolkien, and popular series such as Vikings and The Last Kingdom.

“But what do we really know about the sounds accompanying all this imagery?”

Professor Coccioli added: “'Augmented Vocality' is an unusual kind of history-led project: we investigate sounds and poetic texts from early Nordic language and explore what happens when voices from a distant past collide with contemporary music performance. Can we bring back to life for modern audiences the original expressive power and immediacy of those ancient voices?

“Composer Edmund Hunt and I are really excited by this challenge and look forward to delivering our findings with colleagues at Royal Birmingham Conservatoire, University of Cambridge, and three leading new music ensembles.”

As part of 'Augmented Vocality: Recomposing the Sounds of Early Irish and Old Norse project,’ the team will produce a digital audio database and sample library; vocal processing and live electronics software; two musical compositions for one or more voices, ensemble and live electronics, public concerts, conference presentations and workshops in the UK, Ireland, and Norway.

The two-year project is scheduled to commence this November.