Prince Andrew stripped of affiliations, including from Royal Irish Regiment

Prince Andrew, 61, who served as colonel-in-chief of the Royal Irish Regiment, will also stop using the title His Royal Highness in an official capacity. 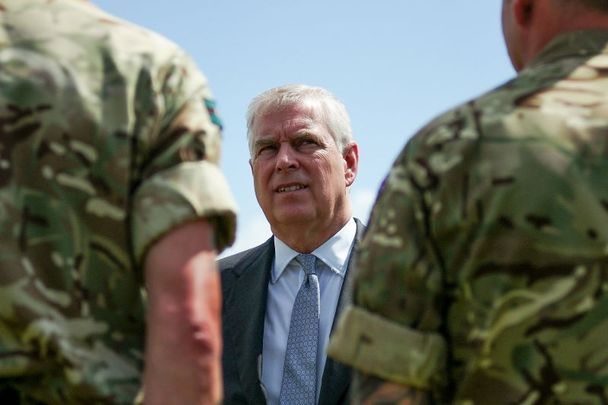 Prince Andrew's military affiliations and Royal patronages have been returned to Queen Elizabeth after it emerged that he would face a civil trial over sexual assault allegations.

"With The Queen's approval and agreement, The Duke of York’s military affiliations and Royal patronages have been returned to The Queen," Buckingham Palace said in a brief statement on January 13.

"The Duke of York will continue not to undertake any public duties and is defending this case as a private citizen."

Among the military affiliations that Prince Andrew has been stripped of is his title of Colonel-in-Chief of the Royal Irish Regiment, which he has held since the regiment was founded in 1992.

Prince Andrew presented the Royal Irish Regiment's colors to St. Patrick's Church of Ireland Cathedral in Armagh in June 2001. The event is commemorated by a plaque inside the cathedral.

The decision to strip Prince Andrew of his affiliations came a day after a US District judge refused to dismiss a civil case brought by Virginia Giuffre, who claims that Prince Andrew sexually abused her when she was 17.

On Thursday, Prince Andrew's accuser Virginia Giuffre reacted to the news that the civil case would be going ahead and praised Judge Lewis Kaplan.

"I'm pleased with Judge Kaplan's ruling yesterday that allows my case against Prince Andrew to go forward. I'm glad I will have the chance to continue to expose the truth & I am deeply grateful to my extraordinary legal team. Their determination helps me seek justice from those who hurt me and so many others. My goal has always been to show that the rich and powerful are not above the law & must be held accountable. I do not walk this path alone, but alongside countless other survivors of sexual abuse & trafficking."

Prince Andrew's lawyers argued that the case should not move forward because Giuffre had signed a deal with convicted sex offender Jeffrey Epstein. However, Judge Kaplan said that the 2009 deal "cannot be seen" to benefit the Duke of York.

Royal sources have stated that this decision was thoroughly discussed in the Royal Family. Like Harry and Meghan, Prince Andrew retains his title HRH but will not use it in any official capacity.

A spokesperson for the Ministry of Defence said it had no comment about the Duke's military titles being handed back to the Queen, and that it was a matter for Buckingham Palace.

Along with this, on Thursday, a letter - released by anti-monarchy pressure group Republic - was signed by more than 150 Royal Navy, RAF, and Army veterans asking the Queen to strip Prince Andrew of his eight British military titles.