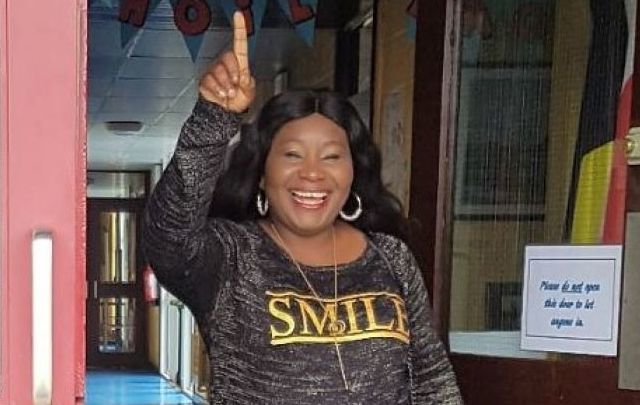 Yemi Adenuga after voting for herself in the Meath County Council elections. @SharingWithYemi, Twitter

Yemi Adenuga, a native of Nigeria, is well-known for her appearances on ‘Gogglebox’

Yemi Adenuga has become the first ever black female and first ever migrant to be elected to Meath County Council in Ireland. The ‘Gogglebox’ star, a native of Nigeria, campaigned as part of the Fine Gael party.

Adenuga was elected in the 11th round of counting alongside Fianna Fáil candidate Padraig Fitzsimons and Independent candidate Alan Lawes. Meath County Council shared the official vote breakdown in a tweet on Monday:

Speaking with the Independent following the election results, Adenuga said: "I'm told there's never been a black female councilor in Ireland. It's awesome and an opening to other people who are interested in contributing.

“I'm delighted to be declared the first migrant councilor in Meath and I'm really looking forward to working with the council on issues that affect the people in the town and county.

"This is a victory not just for me but for all women and ethnic minorities,” she added.

That moment we made history!
First black woman elected into a county council in Ireland!!!
OUR GOD IS AWEEOME!!!
God will never share his glory with anyone!!!
VICTORY ... pic.twitter.com/wJqD3Jcp49

Adenuga left Nigeria, where she was a celebrated television presenter for nearly two decades, for Ireland in 2000 and settled in Navan in 2004. There, she became a fan-favorite for her appearances on the Virgin Media One television program ‘Gogglebox’ over the past four years.

"Gogglebox most certainly helped,” Adenuga said. “I have also been involved in my community in Navan, a number of the women and the parents would know me.”

In 2012, Adenuga founded ‘Sheroes,’ which is described as “a women development and support organisation with a mission to build women and youth to become positive change agents through changing orientation, to build positive mindset, recognizing their efforts, celebrating their successes, empowering them to build sustainable businesses in line with the UN sustainable development goal 2030, and encouraging them to be supportive of one another.”

Adenuga also sits on the board for Cultúr, a community organization that works with migrants, asylum seekers and refugees promoting equal rights & opportunities to develop an intercultural County Meath.

She added that while canvassing, “98 percent of the time, it was very warm, people were very welcoming, they had very encouraging words for me.”

Read More: Ireland is voting in a European election today - What does it all mean?

“I would never have thought of politics in times past,’ Adenuga told The Irish Examiner, “but I'm doing a lot of work for the community already and when Fine Gael approached me, I thought why not -it would give me a bigger platform for the community.”