The White House believes that Mike Pence, the Vice President, has proven he is not anti-gay because he had lunch with gay Irish Prime Minister Leo Varadkar recently. 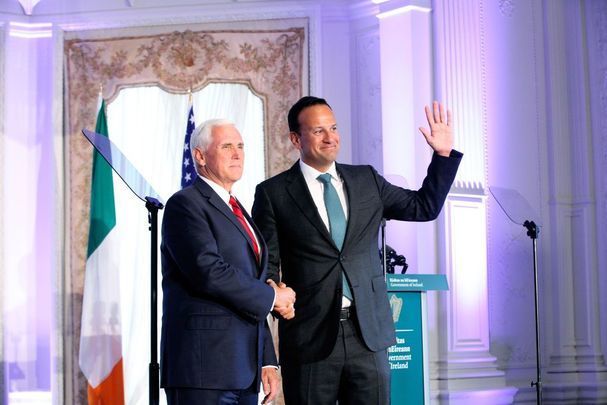 The White House believes that Mike Pence, the Vice President, has proven he is not anti-gay because he had lunch with gay Irish Prime Minister Leo Varadkar recently.

Despite his poor record on gay issues, special assistant to the president and deputy press secretary Judd Deere tweeted that, because the vice president and his wife Karen Pence met with Taoiseach Leo Varadkar and his partner Dr. Matthew Barrett for lunch in Ireland, that meant Pence could no longer be called “anti-gay.”

For all of you who still think our @VP is anti-gay, I point you to his and the @SecondLady’s schedule tomorrow where they will join Taoiseach @LeoVaradkar and his partner Dr. Matthew Barrett for lunch in Ireland. 🇮🇪 @merrionstreet pic.twitter.com/Cj5kMpln0U

Using Varadkar as his shield for avoiding being called anti-gay, a ”some of my best friends are gay “ strategy, will not play well with the Irish leader.

Already Varadkar was upset because Pence had blindsided him with a strong pro-British speech on Brexit after lunch.

Pence’s speech gave rise to one of the now most famous columns ever in The Irish Times by Miriam Lord who wrote that the vice-president, a “much-anticipated visitor,” turned out to have “shat on the … carpet.

Mike Pence isn’t anti-gay, he just doesn’t think gay Americans deserve the same rights afforded to all other Americans, and his voting record reflects that.

Me: “So glad 15 min and a hand shake can erase a lifetime of anti-LGBT policy.”

It's along the same lines as someone saying they're not a racist because they talked to a black person once. SMH

Pence has made many anti-gay comments doubting the bona fides of gay people.

“I do not choose whether I am a black American,” Pence said, as a conservative talk show host in the 1990s, according to CNN, which found the quote in local newspapers. “The great vast majority of the psychological community says homosexuality at a very minimum is a choice by the individual, and at the maximum, is a learned behavior.”

Read More: Why Mike Pence is no friend of Ireland

The vice president has always been opposed to same-sex marriage, same-sex civil unions, and LGBTQ military service. His wife teaches in a school that teaches that gay behavior is sinful.

It is the latest controversy over his Irish trip including his Brexit speech and staying at the Trump Doonbeg property in Clare drawing accusations of enriching the president.