Dozens of Irish politicians on all sides of the political divide have called for Filatov's expulsion since the Russian invasion of Ukraine began on February 24, but Varadkar said an expulsion would be counterproductive. 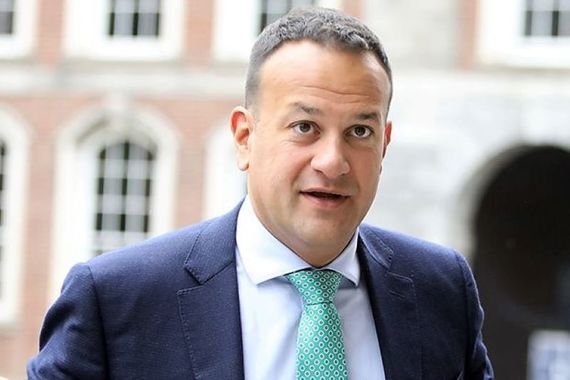 Tánaiste Leo Varadkar has ruled out the expulsion of Russian Ambassador to Ireland Yury Filatov.

Dozens of Irish politicians on all sides of the political divide have called for Filatov's expulsion since the Russian invasion of Ukraine began on February 24, but Varadkar said an expulsion would be counterproductive.

"If we were to expel the Russian Ambassador, which no other country has done, that would probably be reciprocated and our Ambassador would be expelled from Moscow. That would effectively end diplomatic relations between the two countries," Varadkar told IrishCentral.

"We need to be able to talk to Russia because we have citizens there and potentially will have citizens living in Ukraine under Russian occupation."

There have been continuous protests outside the Russian Embassy in Rathgar since the invasion began more than two weeks ago, including the ramming of the Embassy gates earlier this week.

Varadkar, who previously described such incidents as "foolish and helpful", called on Irish people to take part in peaceful protest outside the Embassy.

"There is a risk that any act of violence or criminal damage against any Russian or any Russian Embassy will be used by Russian state media to feed propaganda of the Putin Government,"

The Tánaiste, who is in Chile as part of his St. Patrick's Day ministerial visits, told IrishCentral that the Irish Government is looking to build alliances with countries in Latin America and the Caribbean as the world begins to " split again between those countries who are committed to democracy and multilateralism" and those countries that are authoritarian.

"I think what we have now in Latin America is something that we didn't have 20 years ago, which are some really vibrant democracies.

"We see presidents elected all over Latin America from the radical left, from the radical right, and also from the center. My politics is that of the center, but I respect the right of any country to elect their own government, and whoever they elect, we're going to work with them.

The Tánaiste said Boric will attempt to change Chile "so that it's more inclusive and more equal" over his four-year term but said fears that Chile would become the next Venezuela were unfounded.

"He's certainly of the radical left, but the democratic left," Varadkar said.

Honoured to meet President-elect @gabrielboric. Am here for inauguration as representative of Ireland and the EU. Discussed EU-Chile association agreement, ties with Ireland and the situation in Ukraine. pic.twitter.com/2AFT7qarLW

Varadkar attended Boric's inauguration on Friday in Valparaíso as the Irish and EU representative before laying a wreath at a monument to the father of Chilean independence, Bernardo O'Higgins, in Santiago on Saturday. O'Higgins, who was the illegitimate son of Irish merchant Ambrose O'Higgins, played a key role in the Chilean War of Independence more than 200 years ago.

Varadkar opened the new Irish Embassy in Santiago during his visit and heavily referenced the war in Ukraine during a speech at the Embassy, inviting Chilean Foreign Minister Antonia Urrejola and the Ukrainian Chargé des Affaires in Santiago to speak on the conflict.

Although Irish ministers are traveling again on St. Patrick's Day following two years of pandemic cancelations, Varadkar said he didn't see the return of ministerial visits as a celebration due to the ongoing Russian invasion.

Was honoured to ask the Ukranian ambassador to speak alongside the Chilean Foreign Minister & me at the opening of our new embassy in Santiago. This year St Patrick’s Day is not a celebration so much as a day of solidarity with all those affected by the pandemic & war in Ukraine pic.twitter.com/WYO0csTIoU

Bilateral trade between Ireland and Chile has grown significantly in recent years and Varadkar said there is scope for further growth for Irish businesses looking to enter the Chilean market, especially once the modernized Association Agreement between Chile and the European Union is ratified in the near future.

"It's a country that's far away and we're never going to have the kind of relationship that we have with Europe, Britain, or the USA, but it can be a lot more than it is now."

He also noted the imminent return of a work holiday visa, allowing 200 Chileans to travel and work in Ireland every year. He said he would talk to Minister for Justice Helen McEntee about potentially expanding the number of visas for Chileans coming to Ireland.

"Why not have more people come to Ireland?"