An Irish public health expert has warned that Boris Johnson's new steps could prevent Ireland from successfully winning the battle against COVID-19. 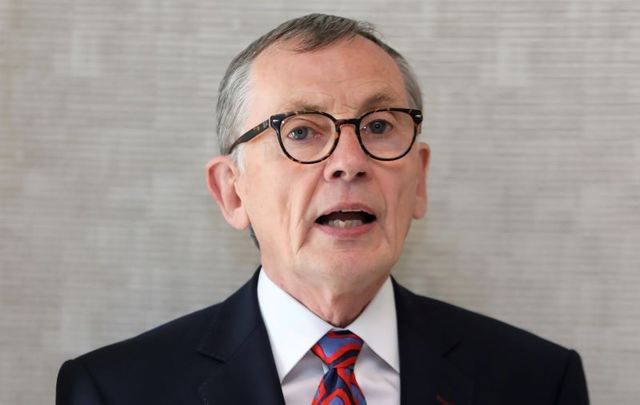 As three devolved administrations within the U.K., including Northern Ireland, opted to distance themselves from British Prime Minister Boris Johnson’s latest easing of restrictions in the battle against coronavirus, a public health expert warned that his new steps could prevent Ireland from successfully winning the battle against Covid-19.

Dr. Gabriel Scally said Ireland has a “fantastic opportunity” to reduce the number of new cases of Covid-19 to zero, but this will not be possible if people can move freely within the common travel area between Ireland and the U.K.

He insisted there must be mandatory quarantine rules in place for high-risk people arriving anywhere on the island of Ireland.

Among the virus lockdown changes announced by Johnson -- and described as confusing by critics -- is an exemption from quarantine for people traveling by plane into Britain from Ireland and France.  They are not bound by the obligation on all other air travelers arriving in Britain to go into 14-day quarantine.

But Dublin government and health sources have stressed that Irish authorities cannot extend any such courtesy to air travelers arriving from Britain to Ireland. They will be obliged to give their details and self-isolate for 14 days.

In addition, Johnson has switched his virus-care policy from “stay at home” to a softer “be alert” and has ordered those who cannot work from home to travel to their jobs this week but to avoid using public transport.  He also says he wants his primary school pupils to return to class in June so they can study for at least a month before the summer holiday break-up.

Read more: Taoiseach says he is “optimistic” air travel will resume this year

Regional U.K. government heads, like Northern Ireland’s Arlene Foster and Scotland’s Nicola Sturgeon, insisted their administrations were remaining “deliberately cautious” and advised their citizens that the “stay home/save lives” message remains in place rather than switching to Johnson’s “remain alert” advice.  They also said their schools won’t be reopening until late August or early September.

Following the reservations expressed by the regional administrations, Johnson’s Sunday night TV address to his nation was modified in a 50-page document laid before Westminster Parliament on Monday.  It referred to eased restrictions in England and warned people not to cross borders within the U.K. because the devolved governments were sticking to the “stay at home” advice.

The document said, “When traveling to outdoor spaces, it is important that people respect the rules in Scotland, Wales, and Northern Ireland and do not travel to different parts of the U.K. where it would be inconsistent with guidance or regulations issued by the relevant devolved administration.”

Meanwhile, Belfast-born Dr. Scally, who is president of the Epidemiology and Public Health Section of the Royal Society of Medicine, said having Ireland’s efforts to fight Covid-19 undermined by decisions in the U.K. is “completely unacceptable.”

Scally said on RTE, “Ireland has a fantastic opportunity to get down to zero cases. Zero new cases is what we absolutely want.”

He said there has to be a serious discussion among the Irish and British governments.

“It would be completely unacceptable to have Ireland doing its very, very best to get down to zero and saves people’s lives, and yet have an open border with a country that is busy lifting restrictions and isn’t doing any community testing,” he said.

Scally said he hoped that a program could be agreed to protect the whole of the island of Ireland.

He described comments by Johnson about the lifting of restrictions in the U.K. and returning to work as “a confusing message.”  As a public health official, he thought the prime minister’s comments were “pretty dangerous.”

The latest Tuesday morning COVID-19 deaths in the Republic were 1,467.  There were 23,135 confirmed cases of illness. In Northern Ireland, there were 438 deaths and 4,149 confirmed cases.