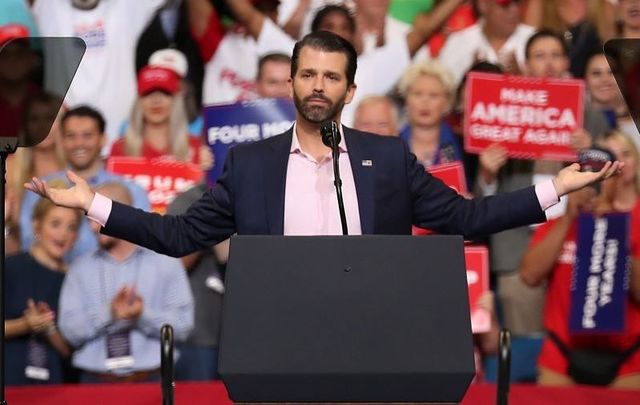 Trump, Jr. appeared on Fox News’s “Fox and Friends” program on Tuesday to promote his new book “Triggered: How the Left Thrives on Hate and Wants to Silence Us.”

On the show, Trump, Jr. said: “The reality is, this isn’t your grandfather’s Democrat Party.

"If you look at their party platform, it is not for working-class Americans. JFK would be an alt-right neo-Nazi terrorist according to them today."

Trump, Jr. also said that the Republican party has changed from what it used to be: "Now, for the first time in 50 years, Republicans are actually fighting back. They’re not just taking the loss because the mainstream media does the pile on.

"They’re not just taking the loss because Hollywood and pop culture says you’re terrible people for clinging to your guns, your bible, your religion and all of those things. We’ve said, ‘hey, we have a fighter in the White House, we’re actually pushing back for the first time ever and making gains,’ which is incredible."

Trump, Jr. went on to say that his father is the “first politician in modern history ... who has actually kept the promises that he made on the campaign trail.”

On Thursday, Trump, Jr appeared on ABC's "The View" with his Irish American girlfriend Kimberly Guilfoyle to further promote his book.

On the show, host Meghan McCain, daughter to the late Republican Senator John McCain, told the president’s son: “Mr. Trump, a lot of Americans in politics miss character, and a lot of people miss the soul of this country.

"You and your family have hurt a lot of people and put a lot of people through a lot of pain, including the Khan family, who is a Gold Star family that I think should be respected for the loss of their son. Does all of this make you feel good?”

McCain was referring to Khizr Muazzam Khan and Ghazala Khan, parents to US Army Captain Humayun Khan who was killed in 2004 during the Iraq War. The couple was featured speakers at the 2016 Democratic National Convention and fierce critics of then-nominee Trump.

After the couple's DNC appearance, Trump remarked on Ghazala's stage presence saying: "If you look at his wife, she was standing there. She had nothing to say. She probably — maybe she wasn't allowed to have anything to say. You tell me."

Ghazala replied with an op-ed in The Washington Post, saying that he was "ignorant" of Islam and doesn't know the meaning of the word "sacrifice."

Replying to McCain, Trump, Jr. said: “I don't think any of that makes me feel good, but I do think that we got into this because we wanted to do what's right for America. My father has been working tirelessly to bring back the American Dream."

While acknowledging that his father is “controversial” and has “offended a lot of people," Trump, Jr. added, "But I also understand he took on the establishment and that’s the premier sin in American politics these days, to do that."

McCain reiterated her initial question: “I understand what you’re saying about policy, but when you’re talking about attacking Gold Star families, who have given the ultimate sacrifice, more than any of us in this room have given, and you put them through pain — does it make you feel like this was worth it?”

"It depends on the hat that I'm wearing," Trump, Jr. said.

"As a father of kids in New York City, it hasn't exactly been peaches and cream for us, either. But, it is worth it when I do go around the country and I see people who are affected by these policies who are getting to live their American Dream again, who are seeing wage growth for the lowest levels go up ... they tell me that they're so happy that they voted for my father."

"You and your family have hurt a lot of people...including the Khan family," @MeghanMcCain says. "Does all of this make you feel good?"

Trump Jr: "I don't think any of that makes me feel good, but I do think that we got into this because we wanted to do what's right for America" pic.twitter.com/dcrTrxtB9I

Read More: Why is Trump betraying our allies and rewarding our enemies?

What do you make of the president's son's comments? Let us know in the comments