Are Trump and Biden set for 2024 rematch?

While the country may not want it, while the media are bored stiff with the same narrative, inevitably the road leads back to the two men. 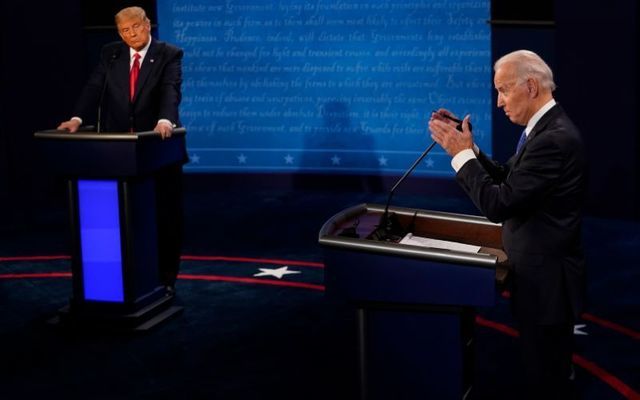 Joe Biden and Donald Trump face off in the final debate before the 2020 presidential election. Getty

Pundits who claim there is no possibility of Joe Biden and Donald Trump meeting for the presidency in 2024 are about to be proved wrong.

In a fascinating article by journalist Jeff Greenfield in Politico last week, he outlined exactly how Trump would have a vice-like grip on the GOP by the time the primaries in 2024 roll around.

As Greenfield pointed out, Trump loyalists control the party machine. Committee chairpersons owe their jobs to Trump, and any rules and regulations that they make will surely benefit the former president.

Because the Republican nomination is almost an entirely winner-takes-all process, Trump, by securing the backing of all the state chairpersons, will have a huge advantage.

That was not the case in the Democratic Party in 2008 when a proportional system, where victory in states like Idaho proved almost as important as winning in bigger states, led to Hillary Clinton’s campaign making a fatal mistake. Barack Obama scooped up many of the small states, and because of the proportional system in place, he stayed close enough in the big states to win the nomination.

Trump, on the other hand, would be able to count all the delegates as his if he wins individual states. And the chairwoman of the Republican Party, Ronna McDaniel, is probably Trump’s biggest booster.

She is in an incredibly important position for 2024. As Greenfield wrote, McDaniel can be expected to fill empty slots in state election boards with Trump loyalists.

There is another point that Greenfield makes, that Trump has already had experience running a national campaign, unlike others in the GOP, and many of his key operatives who stuck with him through impeachments and January 6 will be available to add their know-how.

Florida Governor Ron DeSantis may well be the people’s favorite in the GOP camp. But there is a clear opportunity for Trump to out-maneuver him within the context of how the Republican Party is run.

And now to Biden. His stated reason for running in 2020 was to defeat Trump, who he considered a threat to the democratic system of the United States. He was proven correct in that regard.

It is hard to see how Biden would holster his gun and walk away from another fight if Trump is the opponent. The Biden family met over Thanksgiving about the president running again, and will continue their deliberations through the Christmas period. The New York Times reported that there has been a shift toward Biden running again, especially after the midterm elections.

Biden’s ability to play the political game is far better than any other Democratic politician. So he and Trump are on a collision course again.

But much can happen. Both are old and have had health problems. It is fair to say the country is tired of Trump and getting tired of Biden.

DeSantis is the most obvious outsider to break through the big two domination. But while he has pursued a popular agenda in Florida, running nationwide is a very different thing.

The governor can also be sure of one thing – if he were to defeat Trump in a primary, the former president would not leave the battlefield, and would instead slander and slight him all the way to the election.

Trump has never adhered to Ronald Reagan’s first commandment of GOP politics, that Republicans should never speak ill of each other. Lucky for him he never ran against Trump.

So while the country may not want it, while the media are bored stiff with the same narrative – is there anything new to be written about Trump or Biden at this stage? – inevitably the road leads back to the two men.

In that case, it will be advantage Biden in a race that may not even be close given Trump’s deep unpopularity since January 6.