Biden is still the best candidate to lead Dems in 2024

These days it seems as if it’s all bad news from the White House, but it is way too early to despair. 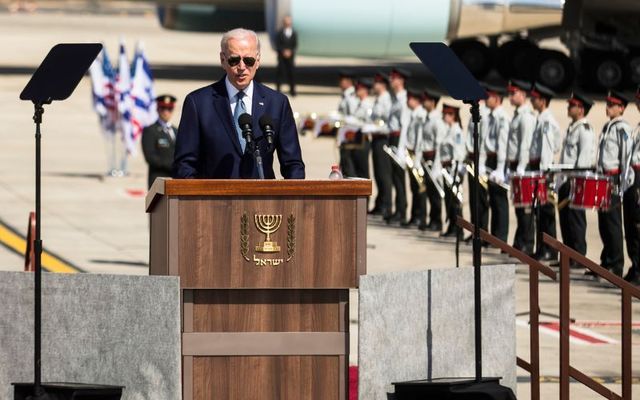 U.S. President Joe Biden speaks during the welcome ceremony during his visit to Israel on July 13, 2022 in Lod, Israel. Getty

These days it seems as if it’s all bad news from the White House, but it is way too early to despair.

Sure, you know you are in trouble when only 26 percent of the party you head wants you in the driver’s seat in November 2024, according to a New York Times poll released on Monday.  A massive 94 percent of young voters want Biden gone too.

They are sick and tired of the wizened old faces that populate key power positions in the Democratic Party, but Biden should be an exception.

Overall, Biden’s job approval rating is in the toilet at 33 percent but with several small nuggets of good news, such as that 39 percent of voters like him personally.

Interestingly, only three percent think he is mentally impaired which will disappoint Fox News greatly. Anyone who can stitch together such a significant riposte to the Russian invasion of Ukraine by galvanizing NATO is far from mental decline.

Let’s see how Biden’s critics would perform if they were under scrutiny day after day after day. Remember Barack Obama said there were 57 states, Ronald Reagan joked into an open microphone that he was ready to bomb Russia, and Donald Trump announced that in 1775 “our armies took over the airports,” conveniently ignoring the fact that there were no airports, or airplanes, at the time.  (Don’t get us started on all Trump’s other verbal gaffes.)

The other good news is that despite his election malaise, Biden would still beat Trump by three points if both were the candidates. The poll showed a 44 to 41 percent lead with 92 percent of Dems voting for Biden.

We need to focus on the things Biden is, rather than what he is not.  For instance, this poll proves he is undoubtedly the best candidate to go head to head with Trump, who will surely run for his old job and stands a reasonable chance of once again being the GOP candidate.

That statement makes sense given that Trump has been thoroughly exposed by his crazed behavior after being defeated by Biden in 2020.  Anyone who watched the debates knows that Biden will always have his number.

Even in the throes of the darkest days of his presidency, Biden is still able to overcome the Stop the Steal fraud, and Democrats might want to push the pause button on getting rid of him.

Put simply, Trump will be 78 at the time of the next election, neutralizing the age issue with Biden who will be 81.  That removes one of the most compelling reasons to cast him aside.

In the meantime, Biden is likely to take it on the chin in November in the midterms, but there is no doubt that he has shown resilience to bounce back in his past.

There are some obvious ways he can improve his own prospects. They might include passing a prescription drugs price reduction bill and backing a Justice Department investigation into illegal sales activities by gun makers for starters.

Most of all. the president needs to have clear, concise solutions to major policy issues, something that has sadly been missing as the White House seems unable to get its messaging under control.

Biden would not be the first president or the last to get shellacked in midterms and go on to a second term (think Bush II and Obama). Defeating Trump along the way would be a blessed prayer answered too. It is not time to say no to Joe.