The Raise the Roof rally began in Parnell Square in Dublin shortly after 1 p.m. on Saturday before proceeding down O'Connell Street and finishing at Merrion Square near Government Buildings. 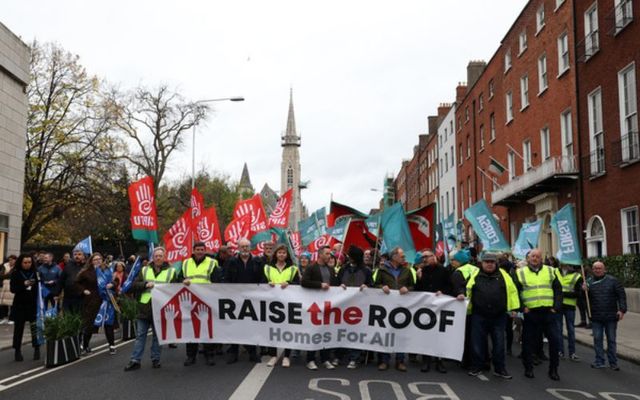 More than 3,000 protesters gathered in Dublin on Saturday afternoon to urge the Irish Government to take action on the housing crisis.

The rally was organized by the Raise the Roof campaign group, which consists of trade unions, housing and homelessness services, political parties, student unions, and women's groups.

The campaign group is calling for a new housing deal including affordable homes and rents. It is also calling for protection from eviction, security for renters, high-quality public housing, and emergency state measures to reduce homelessness.

The Raise the Roof rally began in Parnell Square in Dublin shortly after 1 p.m. on Saturday before proceeding down O'Connell Street and finishing at Merrion Square near Government Buildings.

Owen Reidy, the General Secretary of the Irish Congress of Trade Unions (ICTU), said the rally gave "civil society" an opportunity to stand together and call for a housing policy that "meets the needs of its people".

"The housing crisis is the most important issue that the trade union movement is campaigning on at the moment," Reidy said ahead of Saturday's rally.

"The crisis affects all strands of society, not just union members and workers, but young people who have been let down by the State and cannot afford to buy a house or even rent one, because of an extreme shortage of rental homes and soaring rents."

The scene at Merrion Square, Dublin where thousands turned out for #RaiseTheRoof Rally to demand @RTRHomesForAll pic.twitter.com/DNVe6L1fqt

Actor Liam Cunningham, who attended Saturday's rally, told the PA news agency that people in Ireland "are suffering" because of the Irish Government's housing policy.

"I am sick and tired of foreign investment and vulture funds, and what was known as absentee landlords when I was young and growing up, that the revolutionaries in this country took 800 years to remove, and this government and the previous government have invited back in," Cunningham told the PA.

The rally took place one day after homeless figures in Ireland reached a new record high, with 11,397 people living in emergency accommodation last month, including 3,480 children.

A Sinn Féin motion to declare a housing emergency was defeated in the Dáil on Wednesday, with Sinn Féin housing spokesperson Eoin Ó Broin describing Housing Minister as an "embarrassment".