Sinn Féin passed a motion that the party was “committed to being in government north and south.” 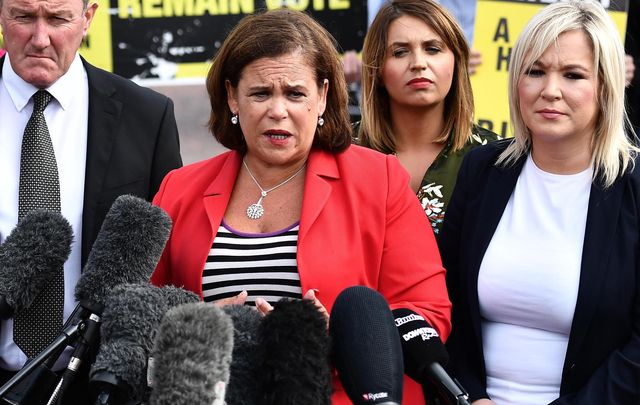 Sinn Féin, at its Ardfheis, or annual conference, set its sights on participating in government in the North and in the republic. The conference in Derry passed a motion that the party was “committed to being in government north and south.”

It is also prepared to enter a coalition in government in the Republic.

With a busy electoral period looming – a general election in the North in December and four by-elections in the Republic – Sinn Féin is also expected to participate in talks to resume the power-sharing administration at Stormont with the Democratic Unionist Party (DUP).

In her keynote address, party President Mary Lou McDonald told delegates that Sinn Féin was prepared to enter a coalition in the south and was “ready to do business” with the DUP and the British and Irish governments and the other Northern parties to restore Stormont.

She said Sinn Féin stood on the “threshold of a new decade, a decade of opportunity.”

She added, “And let the message goes loud and clear to Government Buildings in Dublin and to 10 Downing Street that this new decade is the one in which we will finally end partition to achieve a new united Ireland.”

McDonald also called on the Irish government to have an all-Ireland forum and hold a poll on Irish unity in the next five years.

She told a packed conference, “Many people, for the first time, are now considering their future in a united Ireland. The Irish government and all who say that now is not the time to speak of unity, are wrong.

McDonald said it was “unsustainable” that the power-sharing Northern Executive and Assembly were not sitting.  (They shut down nearly three years ago after a rift between Sinn Féin and the DUP and civil servants are currently running the administration.)

McDonnell pledged, “We are ready to do business.  Sinn Féin has never been the obstacle to power-sharing or good government or doing a deal. I challenge the DUP and both governments to step forward, to resolve the issues and get government back in action.”

She also made clear that Sinn Féin wants to be in government in the Republic but other parties needed to “tell us if they are willing to implement a republican program for government.”

McDonald defended Sinn Féin’s abstentionist policy in Westminster.  She said the party would not enter Westminster in a bid to stop Brexit, despite claims in some areas that they would.

She added, “No Irish elected representative can stop Brexit. That’s the fact.  No Irish republican would swear an oath to the crown.”