Sean Spicer said to be out as White House Press Secretary

The Irish American Trump admin is believed to be aiding in the search for someone to replace him as White House Press Secretary. 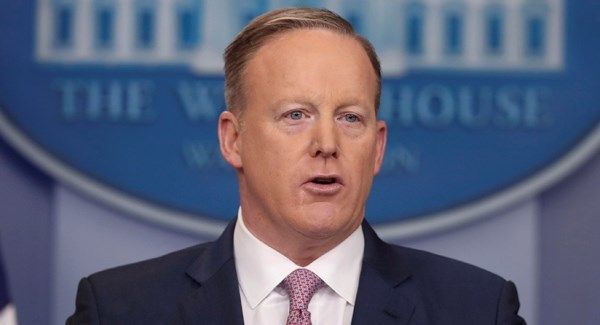 Sean Spicer is to step down as White House Press Secretary and is now actively seeking out a replacement in the role. It’s understood the 45 year old Irish American will likely retain a role in the White House but it’s not sure what exactly yet.

Insiders have previously linked him to the position of US Ambassador to Ireland following the withdrawal of Trump’s first choice, Brian Burns, from consideration.

When questioned by a White House reporter this afternoon as to whether his job responsibilities were about to change Spicer said, “When we have an announcement of a personal nature, we’ll let you know.”

Sean Spicer addresses rumor that he may be removed from Press Secretary job pic.twitter.com/lmOsIbExgY

In recent weeks Spicer has increasingly delegated some of his public appearances to his deputy, Sarah Huckabee Sanders, and speculation was rife from the beginning of his tenure that he would not last long in the job.

Spicer was a popular and well known figure in Washington as communications director of the Republican National Committee but left reporters flabbergasted when he shot to global fame after his first White House briefing, which focused exclusively on the size of Trump’s inauguration crowd.

"This was the largest audience to ever witness an inauguration, period. Both in person and around the globe," Spicer claimed at the time.

"Even the New York Times printed a photograph showing a misrepresentation of the crowd in the original Tweet in their paper, which showed the full extent of the support, depth in crowd, and intensity that existed," he added. "These attempts to lessen the enthusiasm of the inauguration are shameful and wrong."

He then left the briefing room without taking questions from reporters.

Read More: Sean Spicer will need the luck of the Irish in his role as White House Press Sec

He also famously misspoke when making the case for retaliation against the Assad regime for its use of chemical weapons; at the time he said, “You had someone as despicable as Hitler who didn’t even sink to using chemical weapons.”

He later apologized when it was pointed out that the Nazis had gassed millions of Jews during the Holocaust.

President Trump is rumored to have become unhappy with his performance and felt particularly let down by his communications team after the firing of James Comey.

He is also said to be particularly unnerved that Spicer was so bombastically portrayed on Saturday Night Live by a woman, Melissa McCarthy.

The portrayals have elevated him to perhaps the most famous White House press secretary of all time - although the attention from the show is perhaps a poisoned chalice.

Many said the show’s lampooning of Spicer destroyed his credibility with colleagues; The Hill described it as the "The SNL effect" - where a parody of a person is so cutting and real that many no longer distinguish it from reality.

If he does stay on in the White House it’s likely it’ll still be with a communications remit.

“Spicer should be elevated and if he’s not, I would not blame him for leaving,” one White House staffer told Politico. “The president owes him this much for all he’s done for him. Sean is indispensable and I think the president knows that.”

And if he doesn’t, there’s always the US Ambassadorship to Ireland.