Sturgeon says lack of planning “one of the most shameful abdications of responsibility in modern political history." 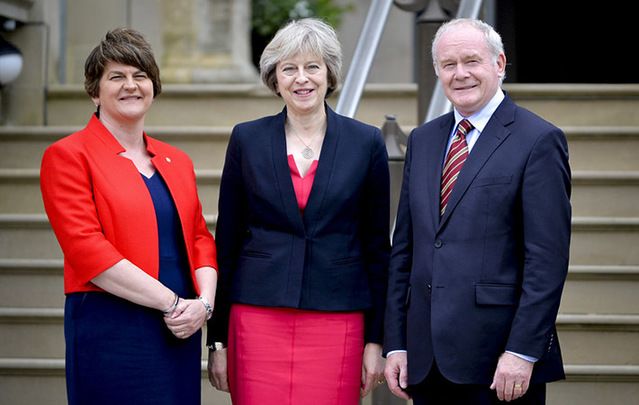 British Prime Minister Theresa May has assured Northern Irish leaders that there will be no return to old border posts and permanent structures.

However, her attempt to keep the United Kingdom in place suffered a major blow when Scottish First Minister Nicola Sturgeon made it clear yesterday that Scotland's best option may be to leave the UK.

May was visiting Northern Ireland as part of a visit to all four parts of the United Kingdom. “No one wants a return to the border of the past.” she said.

“What we do want to do is to find a way through this that is going to work and deliver a practical solution for everybody – as part of the work that we are doing to ensure that we make a success of the United Kingdom leaving the European Union – and that we come out of this with a deal which is in the best interests of the whole of the United Kingdom,” she said

“Brexit means Brexit, but we will be making a success of it and I am clear that the Northern Ireland executive and the other devolved governments will be involved in our discussions as we set forward the UK position,” she said.

Sturgeon, however, called the lack of planning by the “leave” side “one of the most shameful abdications of responsibility in modern political history.”

She was addressing an Institute for Public Policy Research event. Sturgeon said she feared the UK government was pursuing a “hard rather than a soft Brexit” that could impact Scotland significantly. She said a vote of 62 percent in favor of staying in the EU made a Scottish decision to leave the UK very logical.

“I don’t pretend that the option of independence would be straightforward. It would bring its own challenges – as well as opportunities,” said Sturgeon.

“But consider this: the UK that we voted to stay part of in 2014 – a UK within the EU – is fundamentally changing. The outlook for the UK is uncertainty, upheaval and unpredictability.

“In these circumstances, it may well be that the option that offers us the greatest certainty, stability and the maximum control over our destiny, is that of independence.”

Sinn Fein Deputy First Minister Martin McGuinness, who met the British leader with First Minister Arlene Foster, said he told the prime minister that with Brexit, there was “no good news for the people of the north of Ireland.”