It is the October surprise that nobody wanted. 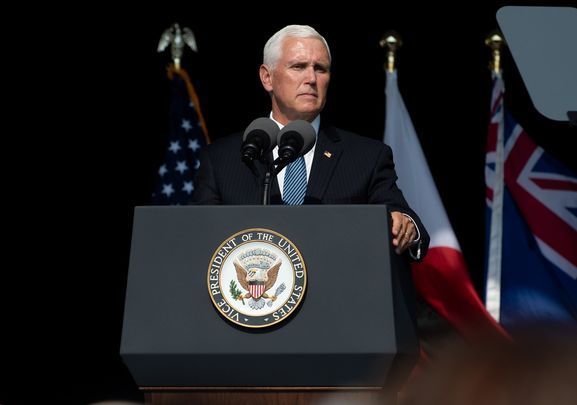 Vice President Mike Pence has been a proponent of not wearing a mask. Getty

At least four senior officials in the Mike Pence VP entourage have now tested positive for COVID including his Chief of Staff Marc Short who is among those most opposed to mask wearing and in favor of sticking  it out.

It appears many have been sick for days in the latest saga of the White House superspreader scene. It is the October surprise both sides dreaded, but it has fallen on the Trump campaign like a wet pall.

The president, who never wants to discuss COVID, now finds it dominant in the media again.

According to The New York Times, questions rage over whether White House Chief of Staff  Mark Meadows tried to conceal the illnesses, a complete  dereliction of duty to warn others who might get infected

As the White House head of the Coronavirus task force, Pence has been a leading proponent of no mask wear, most notably when his wife refused to wear one on stage as he refused also after the VP debate.

Pence, the former Irish American congressman and governor from Indiana, has survived in the White House alligator pool by deciding that on every policy of note the President has is always right when even a kindergartner could see the pandemic response was ludicrous. He has dismissed the science experts and played doctor himself.

Now the disease is clearly rampant in the White House again where Pence and his staff work. The new reality is that president’s boast that they were rounding the bend on the good horse "It’s Only Coronavirus"  now turns out to be an utter disaster as that fake steed is heading straight for the knacker’s yard.

With cases soaring and the only leadership provided is a drumbeat of "Don’t Worry, Be Happy" from the White House, the president’s re-election has all but swung away.

It is a policy Mike Pence must be deeply regretting today. There is no Republican or Democrat way to outflank the virus other than follow the best scientific advice. The GOP ticket has learned the hard way that playing “let’s pretend” with a deadly virus does not make it go  away.