Donald Trump announced on Friday morning that he had tested positive for the coronavirus. 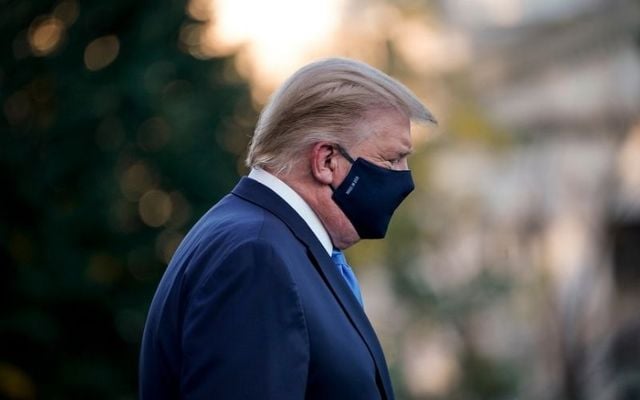 Donald Trump departs for the Walter Reed Medical Center after he tested positive for COVID-19. Getty

For almost four years, fear of a nasty tweet reduced his party to silent witnesses to shame, but now Trump must fight his toughest battle alone.

On Tuesday, Wednesday, or even Thursday night depending on who's telling it, President Donald Trump was informed that he had tested positive for the coronavirus, the virally transmitted disease that on February 28 at a rally in South Carolina he called a “hoax invented by Democrats.”

You can imagine his incredulity on hearing the news. Throughout the pandemic, he has publicly described COVID-19 as a thing other people get. He had mocked Joe Biden on the debate stage on Tuesday evening for wearing a mask. “Joe Biden wears his mask all the time,” he scoffed.  “He's got some serious issues!”

But what Biden does not have, it was confirmed on Friday afternoon, is the novel coronavirus. The deaths of over 206,000 Americans and the infection of over seven million convinced him to take the necessary precautions to protect his health. Thankfully so, because the Trump White House did not officially alert him about the president's condition until long after the news broke online.

The ancient Greeks had a word for Trump's lifelong underlying condition: hubris. They saw hubris whenever swaggering men (it is usually men) show too much pride or self-confidence. Hubris follows from a loss of contact with reality, from a total overestimation of your own capabilities, especially if you’ve been given a little power.

Hubris explains the condition of the current White House. It is a house at war with itself, at war with over half the nation, at war with reality, and still insanely indifferent to the virus that has claimed so many American lives.

It extends to his family; there they were imperiously refusing masks at the first debate like invincible royalty which is how they see their entitled selves. Their father has thought them well.

So one hundred years from now, if he's remembered at all, history will speak of the great hubris of President Donald Trump and all his toadying enablers. He will become a cautionary tale about the wages of human arrogance. We will see something Greek in his refusal to respond to entirely predictable consequences. It's there too in the ever-widening series of staff and advisors who have been infected by being in this orbit.

The president is in the hospital with COVID-19 and the White House is putting out zero guests for the Sunday shows to explain what’s going on while also forcing administration health experts to cancel pre-planned interviews.

And if parents not yet born remember him it will probably be as a fable that they tell their children. Who could be so foolish so often, they will ask their kids? Why do you think no one challenged him? Why were all his howling absurdities not more forcefully opposed? Why did good people allow all this to happen to them? Because all of this happened to them  they will be told. And people lived through it. And many didn't.

They lived in terror of a mean retweet and history will remember them for it. They forfeited their own health rather than face the wrath of their president for daring to mask-up. In the process, they have become what Ed Rollins, co-chairman of the pro-Trump super PAC Great America, calls “the stupid party.” They will be punished at the polls for it too.

No worse than the flu. No big deal at all. pic.twitter.com/MEN4rw8W2b

At a medical briefing about Trump's condition on Saturday, an almost all-white group of doctors revealed that the president had known he was coronavirus positive for at least three days, although he did not disclose it, instead attending events and fundraisers and risking infecting others.

It was only when he and his trusted political advisor Hope Hicks started demonstrating symptoms that the truth leaked out. This is a White House where no one trusts anyone and the truth, if it makes it out at all, usually does so only through revenge or accident.

On Saturday evening a short video of the pale, winded and understandably anxious-looking president hit the internet. But there was something new in his expression that we have not seen before, simple fear. It was unmistakable around the eyes.

Donald Trump today addressed his health in a video recorded from a Walter Reed hospital room.

“I came here, wasn’t feeling so well, I feel much better now," he said. "We’re working hard to get me all the way back ..." https://t.co/3Xp0IMGm5b pic.twitter.com/zV4EmfGsED

As Bob Woodward's new book makes clear, Trump has known from the very beginning that COVID-19 is a dangerous viral pandemic. But he kept that part quiet because he rightly understood it would affect his re-election chances. What he did not foresee is that it would potentially end those chances before the election was even fought. He didn't factor in himself, he never has.

COVID-19 is terrifying but it takes its time. It's not like the flu where you are suddenly bedridden. Instead, it shows up, hangs around, develops your symptoms and then sometime in the second week it floors you. You may have a mild experience or you may find yourself fighting for your life. There is no way to gauge which it will be, and no way to predict how lasting or debilitating the post-viral symptoms will become.

It did not help that Trump's care team at Walter Reed Hospital sent out a clarification memo hours after their confusing conference. They are treating the president of the United States within their walls, so surely they should have gotten their story straight before greeting the world's cameras?

We're paying a lot of attention to Trump's case, but the US just recorded the most daily COVID-19 infections in nearly 2 monthshttps://t.co/8YKUt3M5lM

Nor should it be forgotten that whilst the president and the First Lady receive state of the art care they are fighting to take away health insurance from millions of ordinary Americans.

If the state of the art treatments they receive bring them back to health then they will have been saved by medicines that most Americans can not access or afford, from the clutches of a disease they refused to respect, in time to appoint a justice they have tasked with barring that door to others.

There was always something Greek in their refusal to understand the danger of this pandemic or the effects that their dismissive words and attitudes about it have had on others.

Like F. Scott Fitzgerald's Tom and Daisy, they are "careless people, they smashed up things and creatures and then retreated back into their money or their vast carelessness, or whatever it was that kept them together, and let other people clean up the mess they had made...”

It seems certain that although we are unwillingly plunged into the most unsettling moment of this rolling crisis of a presidency, the nation appears increasingly eager to move past this heartbreaking chapter (that even Fitzgerald would have rushed to a close) in November.