Roughly 25,000 people from all over Ireland attended a protest in Dublin on Friday afternoon to demand a 100% redress compensation scheme for the Government to repair houses affected by the mineral muscovite mica. 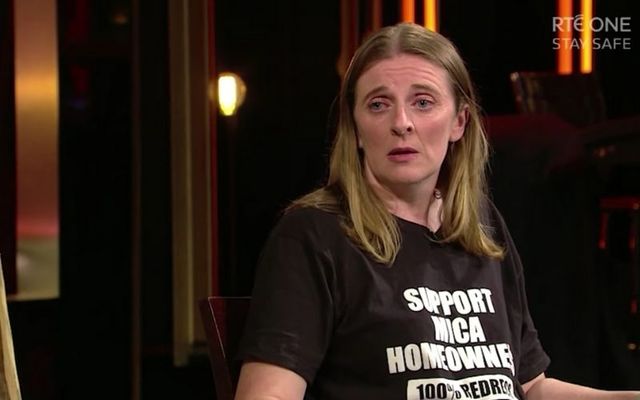 A number of people affected by the mica crisis in Donegal appeared on RTÉ's Late Late Show on Friday night to urge the Irish Government to take action.

Roughly 25,000 people from all over Ireland attended a protest in Dublin on Friday afternoon to demand a 100% redress compensation scheme for the Government to repair houses affected by the mineral muscovite mica.

The mineral was found in a large number of concrete blocks used to build houses in Donegal and affects the cohesion of cement, damaging the durability and structural integrity of thousands of properties.

The Irish Government has introduced the Defective Concrete Blocks Grant Scheme in response to the crisis, promising to cover 90% of the rebuilding costs, but victims of the scandal are demanding 100% Redress, No Less.

"I never ever thought that I would be on the streets campaigning to ask the government to pay for my home, ever," Dunlop told Tubridy.

"I went to university for eight years, studied for a degree, got a Ph.D., came back on an academic job, and kept myself going – and everyone else is the same. The bottom line, for me, is this – what is unfolding in Donegal is a humanitarian crisis. It's not a financial crisis.

"We don't particularly want to go and ask the government to pay for this but the bottom line is that the failure of regulation – the buck stops with them. As it stands at the minute, nothing has changed in terms of regulations."

Dunlop said that the high costs of the redress scheme would be a lesson for the Irish Government to ensure that effective legislation is in place to regulate future housing developments and prevent future scandals.

Lisa McLoughlin and her young daughter Aoife also appeared on Friday's Late Late Show to describe the impact of the mica crisis.

Lisa McLoughlin told Tubridy that she moved into her home in 1999 and first noticed a crack in the cornerstone in 2006.

She said that her house has now lost five cornerstones on one side and added that her walls are cracking and her windows no longer shut properly.

"It’s worse when it rains, the water comes in from the doors," she told Tubridy.

She said that 100% redress would enable mica homeowners to make their houses a home again and allow them to leave without the fear of loud pops and cracks in the middle of the night.

Meanwhile, Aoife McLoughlin said that she wrote to Taoiseach Micheál Martin in April to ask him for his help.

"I wrote the letter to Micheál Martin because he has to help us because we can't afford to fix the house," Aoife told Tubridy.

However, she said that she is yet to hear back from the Taoiseach despite sending the letter six months ago.

"We have to leave our home and I don't want to," Aoife wrote in her letter to the Taoiseach.