Luke 'Ming' Flanagan was able to laugh off the unfortunate fashion faux pas that was broadcast to European politicians. 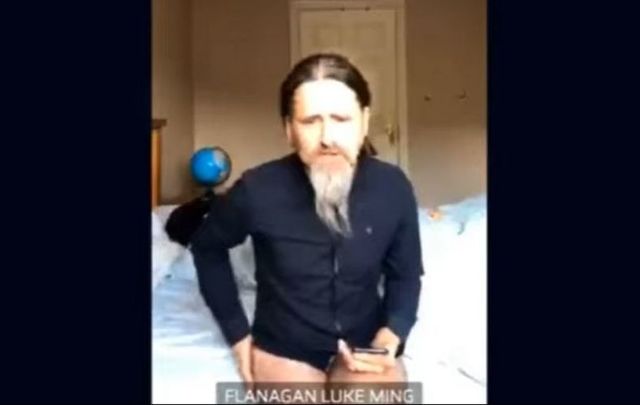 Luke 'Ming' Flanagan's choice of wardrobe for a virtual meeting on Tuesday drew chuckles in the European Parliament and online.

Luke ‘Ming’ Flanagan, an Irish politician, caused a stir online on Tuesday when he spoke during an EU Agriculture Committee virtual meeting wearing just a shirt and what appears to be just underpants.

The brief incident shows Flanagan addressing Commissioner Johannes Hahn while wearing a button-down top and little-to-no bottoms. Other MEPs could be heard stifling laughter during the humorous incident:

Flanagan, an Independent from Co Roscommon, has represented Ireland’s Midlands-North-West constituency as a Member of the European Parliament (MEP) since 2014.

I timed my morning run wrong. Arrived back just in time for meeting. Threw on a shirt. Sat there in my running shorts and participated in the meeting. My sin. My awful sin. Positioning my ipad in portrait rather than landscape. There are bigger problems Anne.

He also told The Irish Times: “I wasn’t that bothered to be quite honest.

Flanagan, who is working remotely due to the coronavirus pandemic, added that his bedroom at his home in Co Roscommon is “the handiest place to work from.”

The Irish politician took the faux pas in stride, opting to retweet some of the hilarious responses he received:

It is worth going through Covid19 lockdown just to see this video. @lukeming you have made my stomach sore from laughing. Shirt & short shorts...hmmmm - no - It's like seeing someone in socks & sandals or triple denim. The best fashion faux pas of 2020 🏆🥇🤣 https://t.co/b64nlMQQUE

I nearly got sick laughing! And fair play to @lukeming for taking it so well! European Parliament Nights. https://t.co/5E37E5hv6s

Ming rocking the shirt & shorts vibe. One of the great things about following .@lukeming is you get a feeling for the institution & his passion for getting things done (whether you support him politically, or not) pic.twitter.com/wFkzUr7bsA

I am so glad I voted no. 1 for @lukeming His critics are just jealous of those legs.

To his critics, Flanagan jokingly said:

Disgraceful I tell you. Down right disgraceful. I really am. Suspend all elections.