Fine Gael, Ireland's third most popular party in last month's election, continue to run the show in Ireland during the crisis and they have used the pandemic to make political gains. 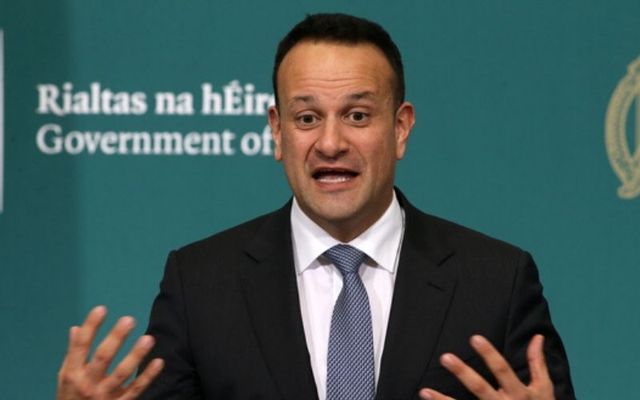 Leo Varadkar has pulled the wool over Irish people's eyes during COVID-19. RollingNews

As COVID-19 grips Ireland in an ever tighter stranglehold, Prime Minister Leo Varadkar and his political party, Fine Gael, continue an embarrassing campaign of political point-scoring as the country faces an emergency not seen in generations.

Fine Gael, Ireland's third most popular party in last month's election, continue to run the show in Ireland during the crisis and they have used the pandemic to make political gains.

Last week, with the country experiencing a steep escalation in Coronavirus cases, the Irish government released a highly contentious financial report and allowed it to slip into oblivion in the endless stream of Coronavirus news.

The report, into the conduct of the National Assets Management Agency (NAMA), was released about a week ago and would have brought a media storm in normal circumstances.

NAMA is a government agency that bought bad-debt from Irish banks and then sold those loans off to aid the country's recovery from recession in the latter part of the 2000s.

The report by the Irish Comptroller and Auditor General found that NAMA sold a series of loans to a property developer for €27 million in 2012, around €29 million less than the actual value of the loans.

With everyone distracted by #Covid_19, the government has published a Nama report it was sitting on for months.

Nama sold loans to a property investor for €27m.

The loans were potentially worth twice that.https://t.co/VhZti0o5sq

Paschal Donohue, Ireland’s Minister for Finance, has been sitting on the report for three months. He chose to release it when Ireland was in the middle of an emergency of unprecedented proportions.

To the cynical mind, the release of the contentious NAMA report during the middle of a pandemic might seem like an attempt to bury an unfavorable report that might do irreparable damage to a party’s reputation.

In truth, the public and the mainstream media care little for NAMA reports at present. They care little for any news that isn’t strictly COVID-19 related. Even the Democratic Primaries have taken a backseat.

It’s unsurprising that Varadkar and Fine Gael chose this exact moment to release the highly sought-after NAMA report while the country’s attention was focused elsewhere. They haven’t stopped playing politics since Coronavirus reared its ugly head.

After all, what good is referring to nurses as “superheroes” when he actively vilified them 14 months ago as they went on strike for better wages? What good is thanking them on national television when student nurses continued to go unpaid as they risked their lives on the frontlines in the fight against Coronavirus?

Ten days after his St. Patrick's Day speech, Minister for Health Simon Harris announced that nurses would be paid, but only after overwhelming public pressure. Fine Gael still dragged their feet every step of the way.

In January 2019, Varadkar tried to turn public opinion against nurses by publicly questioning whether their actions would affect thousands of patients across the country and not questioning whether the Irish Government had long forsaken its critical healthcare workers. The previous Christmas, he angered scores of nurses and doctors by saying they shouldn’t take any holidays over the Christmas season.

But what does that matter if he said "not all superheroes wear capes" on national television?

What good is assuring the Irish public that "we will prevail" and not immediately putting the country on lockdown and saving hundreds of lives in the process?

His speech was lapped up by the majority of news outlets as a definitive moment in the fight against COVID-19.

Only some saw it for what it really was; a PR stunt that gave no new information, written by a speechwriter and read from a teleprompter while paraphrasing Winston Churchill – a man who was no friend of Ireland’s.

It was a political point-scoring exercise and a gross waste of a national address. There was no plan for people who were made redundant during the crisis and no plan for freezing mortgage repayments for the coming months, both of those came later and they weren’t even satisfactory.

The initial €203 a week that the Government proposed as an unemployment benefit was frankly pathetic and it was made all the more embarrassing when the Conservative Government in the United Kingdom, a political party not known for its generosity towards the working class, outlined a financial plan that guaranteed wages up to £2,500 a month.

The Irish Government has since rectified its paltry unemployment benefit and improved it to €350 per week, but, again, they only did so after overwhelming public pressure and it is still far less than the British equivalent.

There have also been numerous reports that major banks are granting moratoriums on conditional bases only and that a number of Irish people are still unable to avail of the mortgage freeze. A number of customers were told that they did not qualify for mortgage freezes since they didn't have sufficient savings in their accounts.

But what does that matter when Varadkar spoke so eloquently about absolutely nothing?

There was an abundant lack of substance in that St. Patrick's Day stunt.

To paraphrase Leo Varadkar paraphrasing Winston Churchill; never has one politician said so little with so much.

Fine Gael had a captive audience on St. Patrick’s Day. They knew that the vast majority of Irish citizens would be spending it in their living rooms and they seized on that opportunity by embarking on a political point-scoring exercise.

Their recent treatment of Sinn Féin is only further evidence of that attempt to play politics.

According to the Irish Independent, Varadkar and Fine Gael are open to forming a national unity government to tackle Coronavirus, so long as it doesn’t involve Sinn Féin.

This kind of petulant and childish attempt to exclude Ireland’s most popular political party from a national government doesn’t reflect well on Varadkar and Fine Gael, who come across as schoolyard bullies who suffered a chastening loss at the playground and are now taking their ball and going home.

In truth, Varadkar hasn’t been able to live with Sinn Féin’s newfound success which largely came at the expense of Fine Gael.

After Sinn Féin won 37 seats in last month’s election, the Taoiseach tweeted a series of attacks against the party in a relentless and indefatigable attempt to turn public opinion against them.

Ultimately, it was unsuccessful and people saw it for what it really was.

He first attempted to smear Sinn Féin by suggesting that they had the numbers to form a government but were refusing to do so.

When you consider that two of those seats are the Healy-Rae brothers in Kerry, who Sinn Féin would never go into government with, it becomes clear that a majority including Sinn Féin is unattainable.

Yet, Varadkar still disingenuously tweeted it out like it was a fact that Sinn Féin was actively avoiding forming a government.

He also tweeted unfounded allegations that Sinn Féin was run by an army council in a desperate bid to stem the relentless Sinn Féin tide that swept the country before Coronavirus took hold.

Why doesn’t McDonald disband the Army Council and the PIRA or if she cannot, repudiate them and sever all links and do so publicly and unequivocally? - ‘Harris agrees with PSNI that army council still oversees Sinn Féin and IRA’ https://t.co/iezbK6kLcS

There have been countless other diatribes since the election on February 8.

He is now trying to do it again, even in the middle of the greatest emergency Ireland has faced in decades, by attempting to exclude Sinn Féin from the response to that emergency.

But this is Ireland 2020. This is why Varadkar and Fine Gael were almost unanimously rejected in February’s general election. The working man remains forgotten, even in the midst of a global health crisis.

But Varadkar remains desperate to cling to power. His speech and his attempts to freeze Sinn Féin out of the political process are evidence of that.

And, to a degree, it's working. Fine Gael is becoming more popular again in the public eye. They have risen in popularity in recent opinion polls by more than 3% and they are virtually the only party that has any presence in the national media.

Every day is just a constant stream of statements from Varadkar, Tanáiste Simon Coveney and Minister for Health Simon Harris and it’s an effort to remind yourself that other parties do actually exist.

But exist they do and they have been vocal on social media with proposals and actions that have been blissfully ignored by media outlets like RTÉ which has become nothing more than a Fine Gael mouthpiece.

Sinn Féin, for example, has been advocating for a ban on all evictions since the outbreak of Coronavirus in Ireland and has tirelessly campaigned for tenant's rights.

All tenants must be protected at this worrying time.

Sinn Féin has put forward a number of proposals to protect ALL tenants including those on licenses, in digs and on rent-a-room. We are calling on all political parties to support these amendments. @EOBroin #COVID2019 pic.twitter.com/2oNVKpxvVs

Sinn Féin has additionally offered protection for those who have been refused mortgage freezes by banks and called for more protection of self-employed workers.

In truth, Sinn Féin has done more for the working class despite being shut out of the political process.

You just won't hear of it as long as Varadkar and co. continue to desperately cling to power.

Read more: Sinn Féin should avoid forming a government so they can achieve their long-term goals