Artist Kevin Sharkey compared President Trump to American actor John Wayne and stated that he should be applauded for "giving up that beautiful wife and golf” to take on the Presidency. 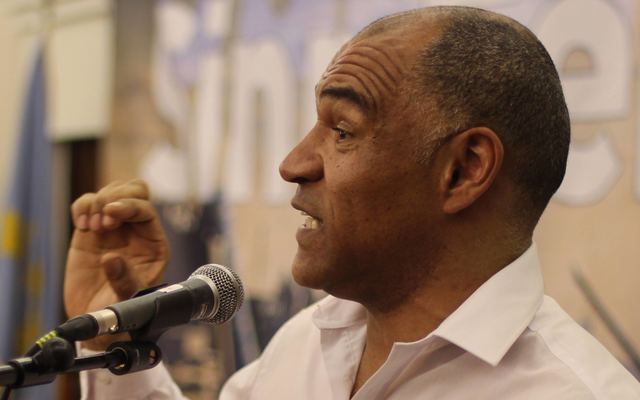 Will an “Ireland First” policy win this candidate votes in his potential Presidential bid?

Speaking at a special presidential nomination meeting of Carlow county council, Sharkey, who has Irish and Nigerian parents, applauded the US President and compared him to the popular Western actor John Wayne, adding that people need to accept Trump is “getting the job done."

"He [Trump] hasn't killed as many as the rest of them [former US presidents], but that's the vote. You may not like him, but I would rather a boss who got the job done than a boss who was a nice man.

"He was elected president and we need to get over it," the artist and activist said, claiming that the 45th President should be applauded for taking on such an important role and for "giving up that beautiful wife and golf” when he became US President in his seventies.

Sharkey was joined by Irish Senator and founder of charity Pieta House, Joan Freeman; businessman Gavin Duffy; and independent candidate Patrick Feeney, as they addressed the Carlow council in the hope of winning support for a presidential bid.

Kevin Sharkey on why he wants nomination to run for Presidency pic.twitter.com/KEmrUoem2k

In order to run in the election set for later this year, hopefuls need the backing of four local councils, or 20 TDs or Senators. There are currently five people hoping to win this support, independent Marie Goretti Moylan not making a pitch to the council on Thursday.

While one independent councilor voiced support for Duffy, Sharkey’s comments sparked some anger, with one member of the local authority stating that he would “never” support a candidate who did not reject Trump.

"When people say put Ireland first, that's just common sense... When I go to Birmingham, Manchester, Luton, I see something I never want to see in Ireland,” Sharkey argued.

"I know racism, this [his comments] is not racism," adding that he has known racism throughout his life.

This is not the first time that the artist has spoken out on immigration with the aim of winning a Presidential candidacy. In April, he told the Ray D’Arcy show: "If we don't protect our future, if we don't protect what we have, what has made us Irish, we won't be Irish in 200 years.

"I'm not against immigration. Look at Australia.  They have a beautiful system there. If you are contributing, if you have a trade that we need and you can support yourself you are welcome.

"We should have an honest, open dialogue about it without being shut down and called racist.

“I'd hope to bring an awareness to the fact that in Ireland we seem to have shifted away a little bit from looking after the Irish first,” he added, stating that we had "fallen into this politically correct speech and people are censoring themselves when they really should be able to have an honest dialogue."

The other speakers at the council were also offered the opportunity to speak for 15 minutes about what their Presidential bid would entail. Senator Freeman spoke about clerical sex abuse, sharing her belief that Pope Francis should meet with victims when he visits Ireland.

"Like you, I am very very anxious the Pope will visit the victims of sexual abuse in this country,” she said.

"I would be very disappointed if he didn't, because the Pope has very significant healing powers and we need that as a country."

Do you agree with Sharkey? Do we need an Irish President who is vocal on immigration? Let us know your thoughts in the comments section, below.