Irish American Kevin McCarthy did not win enough votes to become Speaker of the House during Tuesday's opening day of Congress, forcing multiple ballots for the first time in a century. 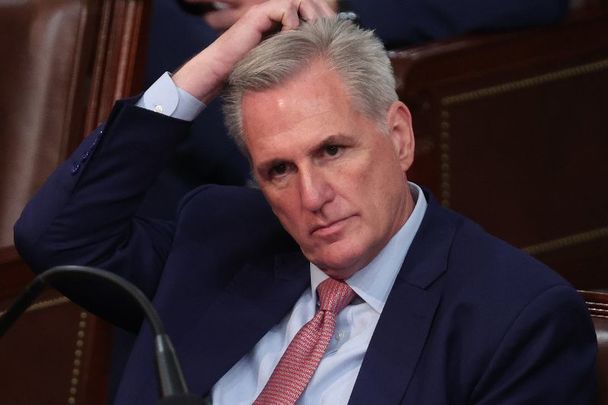 January 3, 2022: US House Minority Leader Kevin McCarthy (R-CA) reacts as Representatives cast their votes for Speaker of the House on the first day of the 118th Congress in the House Chamber of the U. Capitol Building in Washington, DC. Getty Images

Representative Kevin McCarthy, the leader of the GOP, failed in his bid to become the next Speaker of the House in three votes that occurred on Tuesday, January 3, the opening day of the 118th Congress.

McCarthy, an Irish American, failed to secure the 218 votes needed to become the next Speaker of the House, receiving 203 in the first vote, 203 in the second, and 202 in the third.

It is the first time since 1923 that a Speaker of the House vote proceeded to multiple ballots.

19 Republicans voted against McCarthy in the first two votes, and 20 did in the final vote of the day.

"McCarthy has been unable to dislodge dug-in opposition from the right flank of his conference, who are now openly pushing for conservative hero Rep. Jim Jordan (R-Ohio)," Politico reported after the three votes on Tuesday.

Jordan, however, told reporters on Tuesday that there is "no chance" he will become Speaker.

House rules require lawmakers to keep holding votes for Speaker until someone secures 218 votes or a simple majority of members voting. No other House business can occur until a Speaker is selected.

The House of Representatives is set to adjourn again on Wednesday, January 4.

Typically the party with the largest number of House members clinches the Speaker role, but Tuesday's voting was anything but typical. In all of Tuesday's votes, Hakeem Jeffries, the Democratic nominee for Speaker, won more votes than McCarthy, but both failed to secure the 'magic' 218 votes.

McCarthy said after becoming the GOP's Speaker nominee: "I'm proud to announce the era of one-party Democrat rule in Washington is over."

Despite being chosen as the GOP nomination in November, "storm clouds" were brewing over McCarthy's Speaker bid in the lead-up to Tuesday's votes with a  band of conservative Republican hardliners vowing to block his election, a move that was apparently successful so far.

Reports appeared to be split on Tuesday night as to whether or not McCarthy has a viable route to becoming Speaker.

As Speaker of the House, McCarthy, the great-grandson of a laborer from Co Cork, would be the third most powerful politician in the US after the President and the Vice President.

The California politician has touted his Irish roots on previous St. Patrick's Days.

In 2015, during the Obama administration, then-House Majority Leader McCarthy shared an Irish blessing his father used to recite, and in his 2021 St. Patrick's Day message, he reflected: “My great-grandfather came to America from Ireland back in the 1800s.

“He came to California and worked on a ranch - Jeremiah McCarthy.

“I believe everybody is Irish on St. Patrick’s Day.”

My great grandfather came to America from Ireland in the 1800s, and on St. Patrick's Day, I believe everyone is Irish. ☘️ pic.twitter.com/FYDoN1hXr8