US President Joe Biden signed a number of executive orders on his first day in office, reversing some of Donald Trump's hardline immigration policies. 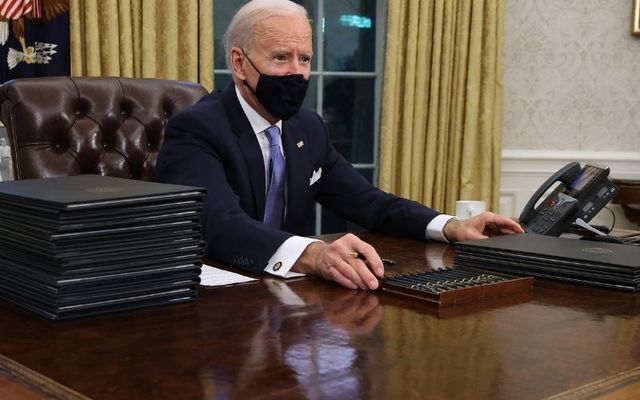 January 20, 2021: President Joe Biden signs a series of executive orders at the Resolute Desk in the Oval Office. Getty Images

President Joe Biden has halted the deportation of undocumented immigrants for 100 days as part of a series of immigration reform measures announced on his first day in office.

The Department of Homeland Security (DHS) announced the news on Wednesday night and said in a statement that the moratorium will allow the agency to "review and reset enforcement priorities."

"Beginning January 22, 2021, DHS will pause removals for certain noncitizens ordered deported to ensure we have a fair and effective immigration enforcement system focused on protecting national security, border security, and public safety," a statement from the DHS issued on January 20 reads.

However, Pekoski confirmed that the 100-day moratorium will not apply to any undocumented immigrant who "has engaged in or is suspected of terrorism or espionage, or otherwise poses a danger to the national security of the United States".

Pekoski said in the memo that the moratorium would allow DHS to conduct a "review of policies and practices concerning immigration enforcement" and also allow the agency to focus on operational challenges at the southwest border.

"The United States faces significant operational challenges at the southwest border as it is confronting the most serious global public health crisis in a century," the memo said. "In light of those unique circumstances, the Department must surge resources to the border in order to ensure safe, legal and orderly processing, to rebuild fair and effective asylum procedures that respect human rights and due
process."

In another order, Biden introduced an "immediate termination" of the national emergency declaration that enabled Trump to divert federal money to fund a wall on the Mexican border.

Another order granted protection to thousands of Liberian immigrants whose immigration status in the US expired under Trump's 2019 Defense Bill.

Biden also introduced a bill to Congress that proposes opening up a pathway to citizenship for roughly 11 million undocumented immigrants in the United States.

There are roughly 15,000 undocumented Irish immigrants in the US, according to research by the Pew Research Centre in 2017.

In total, Biden signed 17 executive orders on his first day in office, reversing some of Trump's immigration, economic, and environmental policies.