Publicans pleaded with Irish Government ahead of 1916 commemorations. soccer, and loss of business. 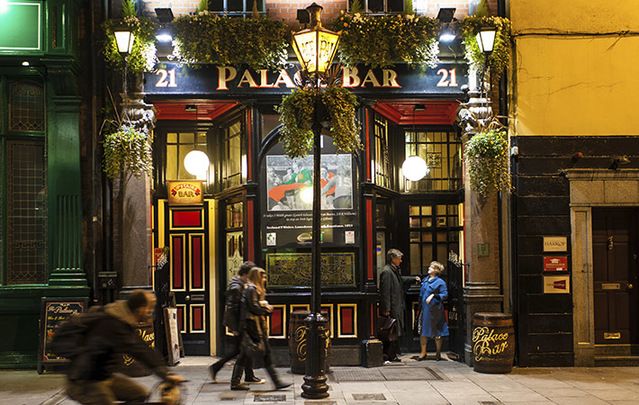 UPDATE: Ireland's Minister for Justice, Frances Fitzgerald, has told RTE Radio One, this morning, that there is no possibility of the Good Friday alcohol ban being lifted this year. She said the Irish Government "won't be doing it this year" and added that there was the possibility that the topic would would be revisited under new alcohol legislation.

Irish pub owners are calling on the Government to lift the ban on the sale of alcohol on Good Friday.

Publicans describe the current law as “archaic” and “discriminatory.” Good Friday 2016, falls on March 25th, which clashes with an Ireland vs. Switzerland international friendly soccer game. It will also be a period of great activity in the country due to the 1916 centenary commemoration events.

On Monday (Jan 18) the Vintners Federation of Ireland (VFI) and the Licensed Vintners Association (LVA) launched the #AboutTime campaign with the aim of convincing the Irish Government to change the current law.

Ireland’s Health Minister Leo Varadkar, told the Irish Independent, his department would not object to any change in the law. The Department of Justice was unavailable to comment.

Good Friday is a day of abstinence and fasting in the Catholic religion. Catholics are supposed to stay away from alcohol and meat for the day in preparation for Easter. The current law is 89 years old, having been introduced in 1927. The Intoxicating Liquor Act states that alcoholic drinks cannot be sold on Christmas Day, Good Friday and St Patrick’s Day. The St Patrick’s Day clause was repealed in 1960 to accommodate visitors coming from overseas to celebrate the national holiday.

Never knew the Good Friday ban on drink was enacted in 1927 by Kevin O'Higgins. So you can't blame Dev for that one. pic.twitter.com/x2oCpUofdA

The legislation provides exemptions allowing the sale of alcohol to those attending events or traveling by sea, rail, air or ferry. Alcohol can also be sold in a licensed theater. Guests staying in hotels can be served alcohol, as long as it is taken with a meal.

Publicans have warned the Irish Government that they must act immediately in order to amend the legislation ahead of the general election.

Chief Executive of the LVA, Donall O’Keeffe, told the Irish Times, that the current law is an imposition to small family-owned businesses in Ireland on one of the busiest weekends of the year.

O’Keeffe said, “Every Good Friday we have thousands of tourists wandering around the streets of our cities and towns asking why they can’t go into a pub for a drink.

“Those numbers will be boosted this year because of the Easter 2016 celebrations.”

Oliver Hughes, owner of the Porterhouse chain of bars and microbreweries, told the Financial Times that the annual closures – and subsequent lost income – add to the cost of running a pub in Ireland.

“It’s cheaper to run a bar in London or New York than in Dublin,” Hughes said, adding that margins are higher and staff and overhead costs are lower in those cities.

Chief executive of the VFI Padraig Cribben told the Irish Times that Ireland’s Minister for Justice Frances Fitzgerald had indicated in 2015 that she had “no great objection” to pubs opening on Good Friday.

Cribben asked, “Most other retail businesses are open and trading so why is the licensed trade being treated differently?”

“We believe there is broad public support for the measure all over the country and it should be a no-brainer for a Government, claiming to be pro-business and seeking re-election, to introduce the required legislation.”

Health Minister Leo Varadkar told Newstalk radio that his department would not oppose reversing the law. He said, “Our focus in health is on reducing alcohol consumption and on reducing binge drinking, and that's all being done with the Public Health Alcohol Bill.

"I don't see any particular benefit in treating one or two particular days of the year any differently to the others, so there won't be any objection from health to any change if it's proposed by the minister for justice", he added.

Should the law be changed? Or do you think it’s good to stick with tradition and see Good Friday as a day of national abstinence?