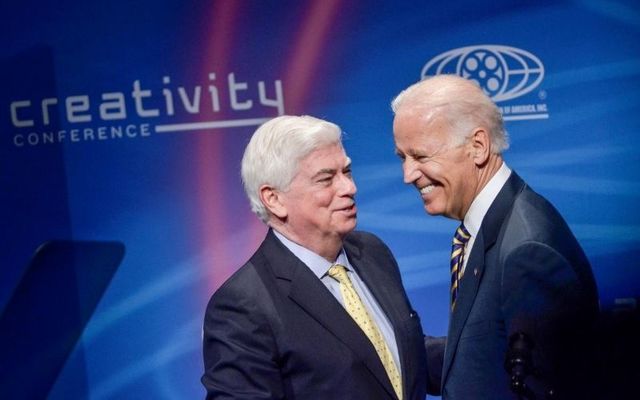 Chris Dodd and Joe Biden have been long-time friends. Getty

The most powerful man in Joe Biden’s campaign for the White House is former senate colleague and fellow Irish Catholic Chris Dodd. His leadership position will delight the Irish American lobby who have long learned to trust him.

The former Connecticut senator, 76, is “first among equals” says The New York Times in a lengthy profile which points out Dodd is considered the key figure in choosing Biden’s Vice Presidential pick.

Dodd has always had very close ties to Biden and the Times relates an incident where Biden, then VP, left an Oval Office meeting with President Obama and German Chancellor Angela Merkel because he was late for a trade conference that Dodd, by then a movie industry lobbyist, was hosting.

The vice president said he bid the chancellor farewell.

“Angela Merkel looked at me like, ‘What in the hell is he talking about?’”

Biden noted the “rumors,” dating to their time as legislative peers, that Mr. Dodd “controlled” him despite Mr. Biden’s Senate seniority.

“I’ve given new life to those rumors,” he joked.

Now Biden has given Dodd the lead in the most important decision the campaign will make, choosing a  vice president nominee

The Times notes that the choice "is about comfort and trust for Mr. Biden, his friends and allies say: Mr. Dodd, a fellow septuagenarian Irish Catholic from the Northeast, has known Mr. Biden for decades and is intimately familiar with the capital’s corridors of power."

I know from experience that Sen. Harris was a formidable competitor in the primary. Women are allowed to compete to win - just like the men. She’s too tough. She’s not tough enough. Please. The 1980s called and wants Sen. Dodd back. https://t.co/jrDWlWtVcV

In a statement, a Biden campaign spokesman, Andrew Bates, said the former vice president was “deeply grateful for Sen. Dodd’s friendship and his contributions to the selection process, alongside his incredibly talented colleagues.”

Dodd was elected to the senate in 1980 and served five terms. He remained one of the closest US politicians on Irish issues and was vital in securing a visa for Sinn Fein leader Gerry Adams to come to the US in 1994.

His farewell party in 2010 was held in the Irish Embassy in Washington with about thirty close friends including Biden.

Dodd also maintained a residence in the West of Ireland in Roundstone, County Galway with ten acres attached and was a frequent visitor there.

Like Biden, he had a failed run at the White House in 2008, an experience that drew the two men together even more. Intense loyalty to each other has been a hallmark of the Biden/Dodd relationship.

“He’s one of the rare politicians who not only expects loyalty but returns it,” said Marla Romash, his press secretary  in the 1980s

In recent years Dodd has been Hollywood’s man in Washington getting paid $25 million for work done over six and a half years. The Times notes: “His return to the political fore this year was both unexpected and unsurprising to former colleagues, given the presumptive Democratic nominee...Mr. Dodd is viewed by many in the party as a kind of first among equals.”