A massive report offering a road map to uniting Ireland in the wake of Brexit has been published today by the Irish Oireachtas (parliament). 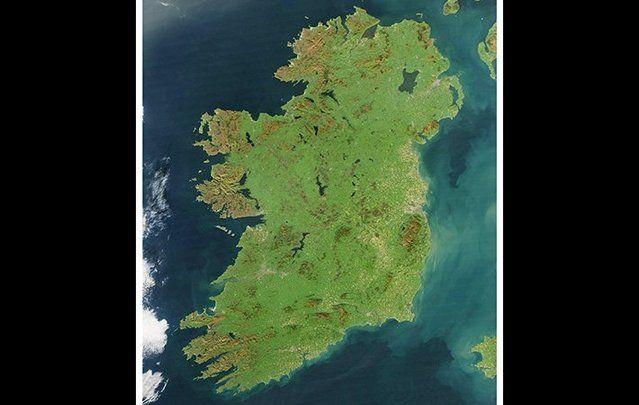 Could a united Ireland be in store with this new report? NASA

The first ever official report into Irish unity has been published today by a cross-party group of politicians and Ireland’s Joint Oireachtas Committee on the Implementation of the Good Friday Agreement.

The report, “Brexit and the Future of Ireland: Uniting Ireland & Its People in Peace & Prosperity,” aims to create a peaceful roadmap to a united Ireland, particularly in the lead up to Brexit and the complications that will present for the island of Ireland.

Chief amongst them is that “The Irish government must negotiate for Northern Ireland to be designated with special status within the EU and for the whole island of Ireland to have a unique solution as part of the Brexit negotiation” and that “any passport controls between Ireland and the UK should be along the same basis as for people traveling between these islands from 1939 to 1952. There should not be a return to passport controls on the borders between the North and South of Ireland.”

A number of them call for further research and analysis into areas such as what an all-Ireland economy would look like, potential impacts for border counties, measures to assess and prevent any safety risks or backlash that could occur, and an audit in relation to the legal and constitutional changes pre and post-unification.

One calls for the establishment of a second New Ireland Forum “in order to set a pathway to achieve the peaceful reunification of Ireland.”

Another recommendation is that “Fears and concerns of the Unionist community need to be examined, understood and addressed comprehensively by all stakeholders in advance of any referendum,” with Daly citing the lack of Unionist inclusion in the New Ireland Forum held in the 1980s as one of the reasons why it was not able to succeed.

"Our job is to represent the people of the whole island of Ireland," he said in an interview with RTE Radio One.

"We can agree on a lot of things. We should fight tooth and nail for all Northern Ireland’s universities and students to have access to EU programs. I don’t think anyone in the unionist community would disagree with that.”

He added that Unionists would need reassurances on topics such as retribution, land ownership and what a British identity would look like in a united Ireland.

A further hurdle to a united Ireland, as cited by opponents, is the handsome subsidy Northern Ireland receives from British treasury.

Read More: Huge boost for united Ireland as EU agrees it would admit it immediately

The report concludes, however, that the economics stack up on the side of Irish unity; economist Dr. Kurt Hubner calculated that it would boost a 32 county economy by $42 billion over the first eight years of unification – based on how the German economy surged after East and West reunited. That figure was calculated prior to the Brexit vote and, as such, stands to change.

Constitutionally, the report envisages the Northern Ireland Assembly will broadly retain the powers it currently has, such as over schools and hospitals, but those of the British Parliament, primarily foreign affairs, defense and the economy, will be transferred to Dublin.

“Instead of the MPs (Members of Parliament) going to Westminster, they would now become TDs (Irish legislators) and go to Leinster House,” Daly said.

Whether there should be some kind of power-sharing agreement between the two communities in the government in Dublin was not considered.

In the meantime, the report expresses a hope that some kind of special status within the EU for Northern Ireland can be agreed upon.

“Northern Ireland is certainly unique, not in its status within the United Kingdom… but also because most of the citizens in Northern Ireland are entitled to be EU citizens under the Good Friday Agreement.”

A similar situation can be found in Northern Cyprus, Daly added, “which has access to a number of EU-funded programs that Turkey obviously [does] not. So there are ways that you can get special status… for the benefit of all the people of Northern Ireland… It does need to have what could be a foot in both camps… and that needs to have imaginative solutions.”

Read More: Moderate Unionist leader says united Ireland may be on the table over Brexit

He echoed the desire for Northern Ireland to retain its place in the EU’s single market, a call made by Taoiseach (Prime Minister) Leo Varadkar a few months ago.

The single market allows free movement of goods, capital, services, and people within it, but the British Government has declared the whole of the United Kingdom will leave the single market at the end of the Brexit negotiations.

“We need the customs union in some way shape or form,” he said, “because analysis has shown that any country that is outside the customs union… all of those have armed military personnel on those borders.”

Such a deal would mean the continued free movement of goods between north and south without custom checks.

However, even if the British Government was in favor of special status for the North, they would still have to get the EU to agree to it and the Spanish Government remains implacably opposed to such a deal.

Daly, however, sees the Catalonian issue as separate from the Irish question: “That’s down to the negotiation process. [The EU’s chief negotiator] Barnier… has a great knowledge of Ireland… and the issue of Catalonia leaving is separate entirely.”

As for the current levels of support for a united Ireland in the North, Daly believes that polling is “widely unpredictable” but takes heart from one that concluded 80% of people would accept a result either way – suggesting any return to the violence of the past is remote. In a BBC Northern Ireland poll commissioned in September 2016, however, 63% of people in Northern Ireland supported staying in the UK, while 22% said they would vote to join a united Ireland.

When IrishCentral conducted a poll in the wake of the Brexit vote, 79% of those voting from Ireland were in favor of calling a border poll to test the desire for a united Ireland referendum.