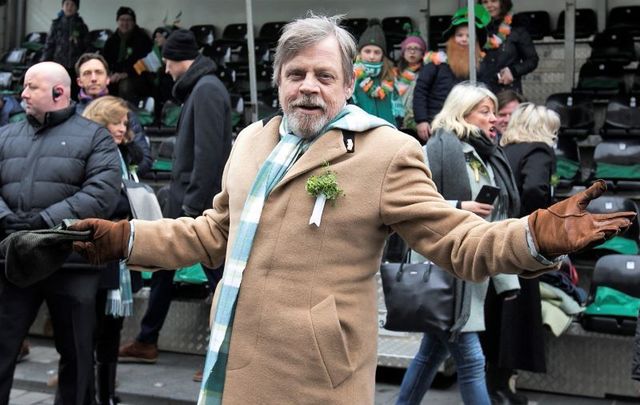 Mark Hamill pictured here at the 2018 Dublin St. Patrick's Day Parade where he was a guest of honor. RollingNews.ie

The force is with Joe Biden as Mark Hamill, aka Luke Skywalker in the Star Wars franchise, has signed on to head an Irish American rally for the former vice president.

Mark Hamill and a group of Irish American politicians, musicians, and Biden family members including sister Valerie Biden will be present for the online rally on Thursday, August 6th at 7 pm EST.

To sign up for the rally, which is not a fundraiser, click here. The event is being organized through Mobilize America, which describes itself as an "events management and volunteer recruitment platform that connects mission-driven organizations and their supporters."

Hamill is a proud Irish American, who served as International Guest of Honor at Dublin's Saint Patrick's Day parade and who was instrumental in having the latest Star Wars episode filmed partly in Co Kerry.

I met Ireland's President Michael Higgins as guest of "honour" at Dublin's epic #StPatricksDay2018 Parade, had a thrilling, unforgettable experience AND avoided creating an international incident. All things considered, a Win-Win.👍
Thank You 🇮🇪! #Gr8ful pic.twitter.com/rIxJGCSQIu

Biden has always been remarkably proud of his Irish heritage so much so that The New York Times reported last week that the British government is fearful he will take Ireland’s side on key issues such as Brexit and the Irish peace process.

In 2016, Biden paid an emotional visit to Ireland as vice president and has reportedly said that if he is elected in November, a trip to Ireland is a "priority."