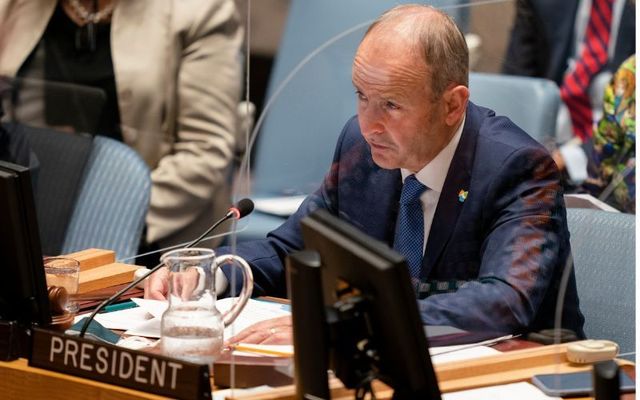 September 23, 2021: Taoiseach Micheal Martin presides as president during a meeting of the United Nations Security Council during the 76th Session of the U.N. General Assembly at U.N. headquarters in New York City. Getty Images

Micheál Martin, Ireland's Tánaiste and Minister for Foreign Affairs, has reflected on Ireland's achievements at the conclusion of its two-year tenure on the UN Security Council.

"It has been a challenging time, but we have achieved some real and tangible results," Martin said.

"For example, along with Norway, we led negotiations to keep open the cross-border humanitarian operation into North-West Syria, allowing life-saving aid to reach over four million vulnerable Syrians.

"We have stood by Ukraine, consistently holding Russia to account for their illegal invasion, and countering Russian disinformation on the Security Council."

As we approach the end of Ireland’s term on the @UN Security Council, Tánaiste and Minister for Foreign Affairs @MichealMartinTD reflects on some of Ireland’s key achievements over the past 2 years. 🇮🇪🤝🇺🇳#IrelandUNSC

Martin added that Ireland had helped lead the Council's work on addressing the catastrophic humanitarian crisis and violations of international humanitarian law that took place in Ethiopia during the Tigray War, which came to an end last November.

"We have also ensured that the voices of civilians - particularly women and young people - from conflict-affected countries are heard at the council," Martin said.

"From Afghanistan to Palestine to Somalia, we've brought the day-to-day experiences of those in the midst of conflict to the table where the decisions that affect their lives are made."

The UN Security Council consists of 15 members - five permanent members (France, Britain, the US, Russia, and China), and ten other temporary members who serve on rotating two-year terms.

The United Nations says its Security Council “has primary responsibility for the maintenance of international peace and security.

Ireland began its month-long, rotating presidency of the Security Council on September 1, 2021.

Today Ireland begins a new role on the #SecurityCouncil:

Ireland’s “mammoth” bid to win the coveted seat on the 2021- 2022 UN Security Council was launched back in 2018 and drew support from figures including President Michael D. Higgins, former President Mary Robinson, U2's Bono, and support was even shown at a performance of Riverdance at Radio City Hall in March 2020.