The new ambassador presented his credentials to the president during a meeting at the White House on Friday. 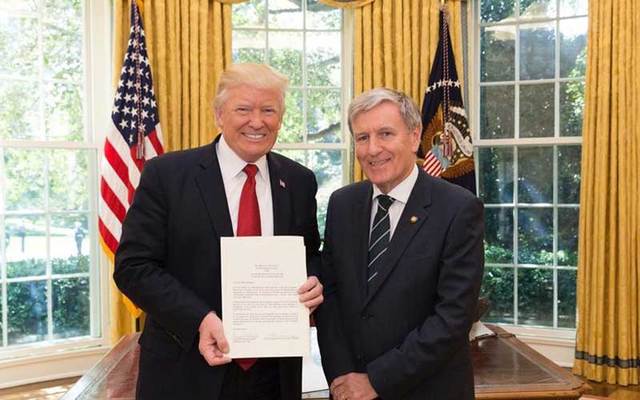 Ireland's ambassador to the US Dan Mulhall and President Donald Trump in the Oval Office, where the new ambassador presented his credentials and briefly met with the president on Friday. Twitter/@IrelandEmbUSA

Ireland’s new Ambassador to the US, Dan Mulhall, met with President Donald Trump at the White House on Friday.

Mulhall presented his credentials to the president during the brief meeting in the Oval Office, where the two men discussed immigration issues, the bilateral economic relationship between Ireland and the US, and St Patrick’s Day celebrations.

Read More: Dan Mulhall to be Ireland's next Ambassador to the US

The president greeted the ambassador "warmly" and was said to have been “very positively disposed” to Ireland, RTÉ reports.

My thanks to all who sent me congratulations & best wishes. And thank you @realDonaldTrump @potus for welcoming me warmly @WhiteHouse. https://t.co/C1sMCmL9Hu

Mulhall, who succeeds Anne Anderson in the post, was previously the Irish Ambassador to the UK for four years. His previous postings also include Germany, Malaysia and Belgium, and he was the Director-General for European Affairs at the Department of Foreign Affairs from 2005 to 2009.

The Waterford native studied Irish history at University College Cork. He entered the civil service in 1978 as a third secretary in the Department of Foreign Affairs.

Like Trump, Mulhall is a fan of Twitter, where he frequently tweets poetry to his followers. However, as Mulhall recently told The Irish Post, he "tweets carefully."

"I don’t go out of my way to offend people. But what I found is that most people out on Twitter are living lives of quiet satisfaction – the angry ones get a lot of attention but you can probably ignore them most of the time."

Mulhall arrives at a challenging time for US-Irish relations as President Trump cracks down on illegal immigration, potentially affecting thousands of undocumented Irish living in the US.