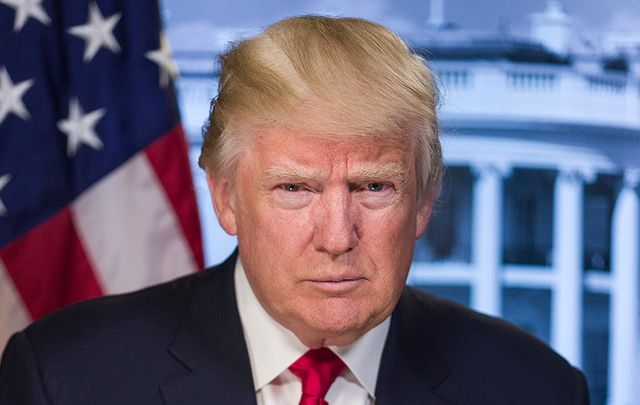 President Trump was expected to be a hurricane-like storm when he reached the Capitol but his danger has fizzled through his work with Schumer and Pelosi.

Hurricane Donald was expected to be a category 5 storm when it reached Washington last January.

Alas, it fizzled out but hangs around like a low-level Atlantic storm that keeps threatening from offshore.

However, in the wake of Hurricane Irma (surely a Democratic storm as it only flattened Republican red states), there are hopes that Irma and Donald can join up together.

President Trump was expected to be a hurricane-like storm when he reached the Capitol but his danger has fizzled through his work with Schumer (pictured) and Pelosi.

Hurricane Donald was supposed to be their storm, yet there it was dancing off the weather charts and joining up with Chuck and Nancy on debt ceilings and keeping the country running and other things that really mattered to people.

Cue outraged Republicans, especially the Freedom Caucus, which is only free if you believe the world is flat, coal-mining should make a comeback, and hurricanes are God’s work, not a result of climate change.

But Hurricane Donald blew the freedom folks far out to sea and in the process, the weather gods feared them no more. Oh, and the fake media loved him for it. ”Finally," they said, “a country not held hostage by kooks and crackpots.”

And Hurricane Donald saw that it was good and a strange thought hit him. What if he and the suddenly friendly Democratic storms roamed the heavens together, taking care of business in a way that reflected the needs of everyone, not just the Freedom Caucus?

Imagine, no more “Bah Humbug” from cranky McConnell or “How many sides of my mouth on this argument can I speak from” Speaker Paul Ryan.

And Hurricane Donald saw that it was possible that the American people, not the 35 percent who support him, could rally around him and make him a proper president again.

And so the North wind blew for those who wanted only the GOP way or the highway. Tropical storm Steve Bannon was whooshed out to sea.

Read more: Steve Bannon on how he got his Irish up and finished Chris Christie’s political career

Steve Bannon was one of Hurricane Donald Trump's latest victims.

The soft gentle breezes from the west worked wonders with Hurricane Donald. Suddenly the media loved him and the American people too and enough Democrats and Republicans to win him victory after victory until he was tired of winning.

It was all so easy in the end thought Hurricane Donald, “I should have thought of it earlier.”