Drew McGinty is a Democratic candidate running in Pennsylvania’s 7th district, who felt enough was enough after the election of President Trump. 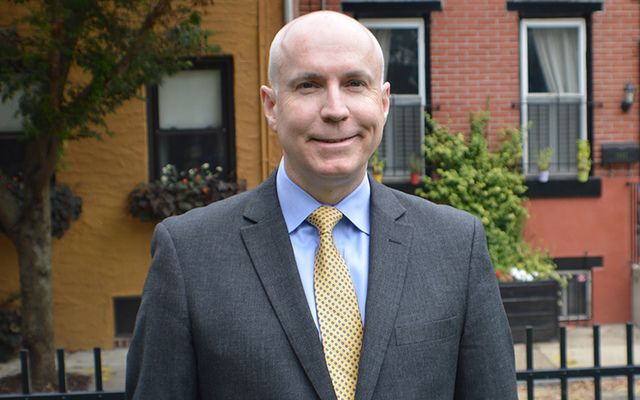 Over the years, people had suggested Drew McGinty should consider running for office but he’d never felt focused enough on politics to take the leap. While a leader in his community in areas such as green energy, it wasn’t until last November’s election of Donald Trump that the Pennsylvania native, growing tired of the extremism and polarization of the country’s politics, decided to put himself forward for the state’s 7th District.

“I figured I’ve always been a moderate and I've always found ways to work with different diverse groups of people. I said, ‘Enough is enough. I can go in there and I can work with pretty much everybody and I have the skills, the temperate, and the passion,’” McGinty told IrishCentral.

In a highly gerrymandered congressional district where Democrats have won only two of the last 15 elections for Congress, and where the incumbent representative, Republican and fellow Irish American Pat Meehan, has held the seat since 2011, McGinty believes his focus on economic security, his moderate views, and the fact that, like our President, he is not a career politician, will be enough to see him through.

“How many IT people are running for office who never ran for office before,” he asks.

“I started my own company. I started, with some others, a volunteer not-for-profit in 2006, the Ulster American society, with a focus on advocating continued American support of economic development and peace keeping in Northern Ireland.”

“There are many people I've come across who are first time politicians,” he continued.

“I think it's a competitive advantage. I think people are tired of what's going on and the election of Trump put it over the edge for many people. They can't take it anymore and they need to get out and, like myself, do something.

“I truly believe that there's a lot of value I can bring to the people of the district with my experience and skills in both professional and volunteer, charitable work over 30 plus years. I think we need more non-career politician who can help solve problems.”

We need a representative that will focus on the future and @RepMeehan is not the man for the job. #McGinty4Congresshttps://t.co/YldF1yilJc

Having lived in Montgomery County all his life up until two years ago, McGinty has spent 21 of his 30 professional years working in the healthcare industry - 13 of these in health insurance companies, several years in pharmaceutical, and about 2 years in health/hospital systems - a career history that the Irish American, whose family hails from Ulster,  believes to have shown him that the US can achieve universal health care for all.

“The Affordable Care Act (ACA) has been a dramatic step forward in ensuring that all Americans have high-quality affordable health care throughout their lives and for the things they need it for,” he explains.

While universal healthcare is a critical pillar in his campaign, it’s economic security for all Americans that is the lynch pin to McGinty’s run for office, a vital issue he believes will lead to improved education, better jobs, and improved healthcare, in turn, if properly addressed.

“I think back to the time with my first wife when she was a homemaker, we had two young children, I was at a full-time job and I was going to study my master's degree at night,” McGinty reflects.

“I wasn't thinking about the environment or many social issues. When you're just surviving, which more and more people do now, they’re just surviving, you get caught in survival mode and you can't break out and have the freedom to really explore what you want to do with your lives and with the lives of your children and your family and that's horrible.

“When we focus on economic security, other things will come.”

In particular, McGinty feels that America needs to place the same weight on trade skills as they do on getting to college, no longer measuring the success of the country on the number of people we manage to send to university but on the number of people we prepare for employment, measuring prospective employees on different metrics depending on where their skills lie.

“The skilled trades are vital to the success of our young people and the nation,” he enforces.

“We have metrics about the nation and about how many people go to college but I think that these metrics should be gone.

“We have people go to college and university now, they get these degrees, they come out and they're highly in debt. It’s, first of all, tough to get a job and then when they do, they're minimum wage jobs.

“They can't realize the American Dream being weighed down with the horrible burden of debt and making barely living wages ... The country is shifting away. We should be focusing as much on the skilled trades and different paths.

“It's just not for young people, too,” McGinty concludes.

“I think we need to look at when one industry starts into decline, like coal mining, those jobs aren't coming back and so we should have programs for older people to be retrained in skilled trades so they can go on and find other jobs.

“People don't like change but sometimes we’re forced to. We need to look at other skilled trades that they could possibly go into.”

Drew McGinty is a Democratic candidate running in Pennsylvania’s 7th district. You can find more information on him here.