Former Irish prime minister has been added U.K.-based Speakers Associates agency and could bank up to $26,000 per talk. 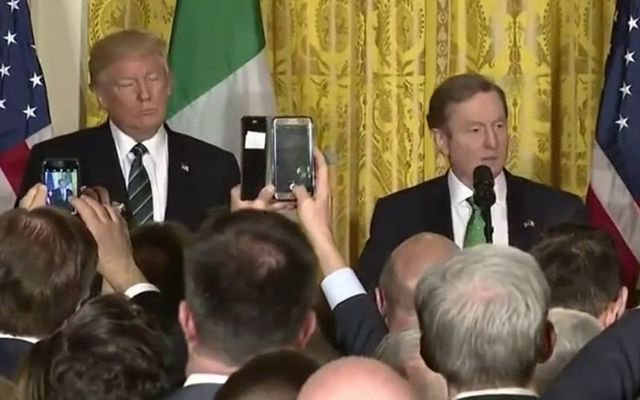 Enda Kenny's much-lauded St. Patrick's Day speech in the U.S. has helped the former taoiseach (Irish prime minister) carve out a lucrative new career as an after dinner speaker.

Kenny is the latest high-profile addition to the prestigious U.K.-based Speakers Associates agency, where he is listed in the highest fee category. The ex-Fine Gael leader, who stepped down as taoiseach in June, is charging upwards of $26,000 per talk, the price bracket reserved for the agency's most sought-after speakers.

Along with praising the 66-year-old father-of-three's political legacy, the agency's website described their latest recruit as a "captivating and memorable" speaker. And in a glowing profile on the Co. Mayo native, the agency's chiefs singled out his celebrated St. Patrick's Day lecture on immigration to President Donald Trump. Kenny's speech on Capitol Hill was viewed more than 30 million times and received universal praise, with many praising the then-outgoing taoiseach for his courage in standing up to Trump.

In its profile on Mr. Kenny, the website states,  "As a speaker, he is captivating and memorable, whose expertise and experience in leading Ireland through its worst recession provides valuable insight to his audiences." Kenny isn't the only Irish public figure, who's listed in the highest “on application” price bracket.

Irish TV presenter Graham Norton and Live Aid hero Bob Geldof are two of the agency's most in-demand speakers, both able to command hefty fees, as well as expenses, for a single talk. Former Irish President Mary Robinson and ex-Formula One boss Eddie Jordan are also among the highest-paid orators on the agency's books.