Edwin Poots is set to demand that the Northern Ireland Protocol is scrapped during his meeting with Taoiseach Micheál Martin. 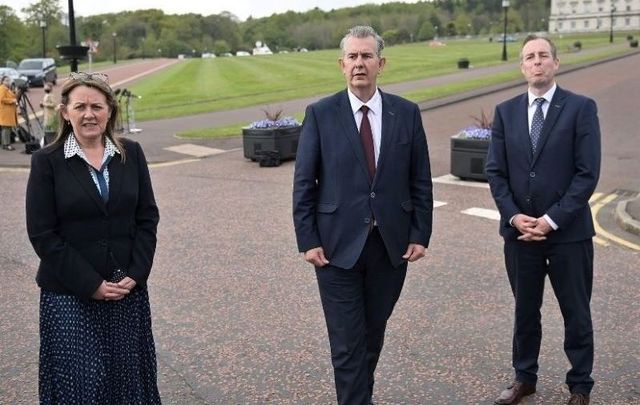 DUP leader Edwin Poots is set to meet with Taoiseach Micheál Martin for the first time when he travels to Dublin on Thursday evening.

Poots was elected leader of the DUP last month and has been highly critical of the Irish Government ever since.

The new DUP leader told the Stormont Assembly in May that North-South relations have "never been worse" and blamed Tanáiste Leo Varadkar and Minister for Foreign Affairs Simon Coveney for attempting to "create barriers" between Northern Ireland and Great Britain.

Poots told the Assembly that "every home" had been damaged by the Northern Ireland Protocol agreed as part of the Brexit Withdrawal Agreement.

Poots said that relationships between Northern Ireland and the Republic of Ireland could only be fixed if the DUP received "reassurance" that they would get a better deal in the Protocol.

He is set to discuss the Protocol in his meeting with Micheál Martin on Thursday and will focus on the DUP's demands to scrap the Protocol.

Martin has previously stated that the Protocol cannot be scrapped and said that discussions should center on how it can be best implemented.

The DUP has been vociferously opposed to the Protocol, leading to a breakdown in relations with the Irish Government.

However, DUP MLA Paul Givan, who is likely to become Northern Ireland's next First Minister, told BBC Radio Ulster on Thursday that the North-South relationship is a "very important one" and that the DUP wanted to "have good relationships with our closest neighbor".

Givan said that the Protocol was agreed upon without the consent of unionist people and that it caused damage to North-South relationships.

He also said that the meeting would talk place at 7 pm in Government Buildings in Dublin.

The talks come at a time of rising tension between parties in Northern Ireland over the non-attendance of DUP ministers at North-South political meetings.

Sinn Féin MLA Deirdre Hargey - Northern Ireland's Minister for Communities - said on Wednesday that she was seeking legal advice on a judiciary review on DUP ministers not attending North-South meetings. She cited a recent cross-border meeting on language that did not take place because DUP Junior Minister Gordon Lyons did not attend.

It is totally unacceptable that government business is being hampered by DUP ministers failing to attend North / South Ministerial meetings.

This is the second time the DUP failed to attend a language sectoral, this continued boycott is unacceptable, futile and cannot continue pic.twitter.com/5vqTxl0A6m

Under Stormont rules, any meeting with the Irish Government involving a nationalist minister must also include an accompanying unionist minister.

Hargey said that two North-South meetings on language have been canceled in recent months because a DUP minister refused to attend.

She said that North-South meetings were integral and that the DUP was undermining the Good Friday Agreement by refusing to attend.

"As well as being disrespectful to the Irish language community, it is totally unacceptable for government business to be impeded in this way by a DUP boycott of one of the institutions of the Good Friday Agreement," Hargey said.

The DUP has boycotted several cross-border meetings in recent months as part of a protest against the Northern Ireland Protocol.