"The appalling massacre of music lovers of different generations at a public event in Las Vegas will have shocked people all over the world.” 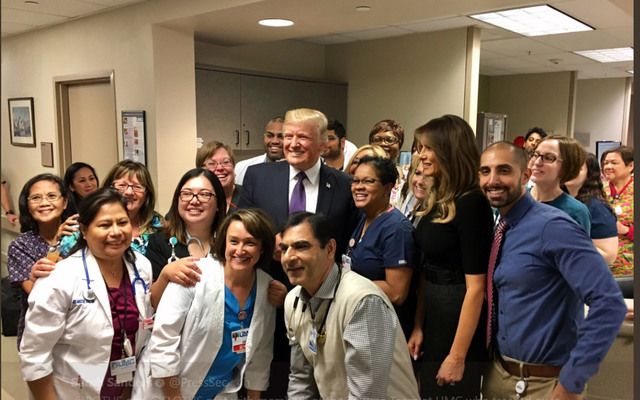 President and First Lady Trump met yesterday with members of the Trauma Team at UMC who treated over 100 people after the Las Vegas shooting. Sarah Sanders/Twitter

Irish politicians share their condolences with US President Trump after the horror of the Las Vegas mass shooting.

Taoiseach (Prime Minister) Leo Varadkar sent a message of condolence to President Donald Trump on Tuesday, two days after a gun massacre in Las Vegas killed at least 58 people and wounded hundreds of others.

Varadkar’s message “express[ed] the condolences of the Irish people to the people of America. In the face of such horror and tragedy, the Irish government and people stand in solidarity with our friends and families in the United States.”

Taoiseach Leo Varadkar was among the first Irish politicians to express their condolences after the Las Vegas shooting. Image: RollingNews.ie.

On Sunday evening, 64-year-old Stephen Paddock opened fire on crowds enjoying the music at the Route 91 Harvest Festival in Las Vegas.  Taking aim from two smashed windows in his hotel room on the 32nd floor of the Mandalay Bay hotel, police are still investigating the motive behind the former accountant and professional gambler's deadly attack.

Police are still unsure of the motive behind the attack as the city struggles to come to grips with the deadly mass shooting in Las Vegas. Image: CNET/Twitter

"I wish to express my heartfelt condolences and those of the Irish people to the families of the victims, those who were injured and to the people and the authorities of the United States on this tragic day."

Irish President Michael D. Higgins said, “the appalling massacre of music lovers of different generations at a public event in Las Vegas will have shocked people all over the world.”