Who is Doctor Sean Conley, the physician to Donald Trump?

As the President battles COVID-19 we look at his Irish American White House physician's career so far. 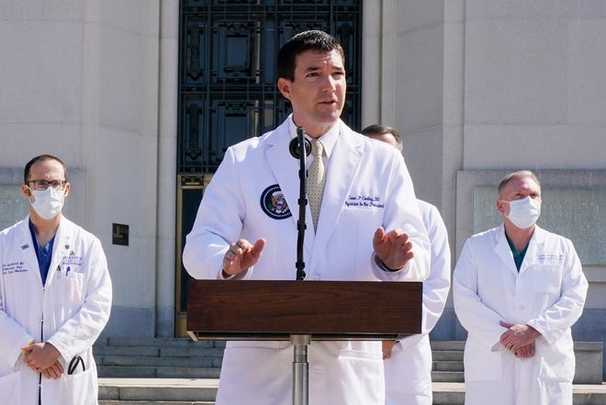 Doctor Sean Conley (40), from Doylestown, Pennsylvania, is the man in the international spotlight as President Trump’s main doctor during his coronavirus illness.

Conley is not actually a Medicinae Doctor (MD). He is a graduate of a Philadelphia osteopathic college. An osteopathy degree, Doctor of Osteopathy (DO), is considered as equal to an MD.

He took a bachelor’s degree in science in 2002,  at Notre Dame University, in Southbend, Indiana. He qualified as an osteopath, in 2009, from Philadelphia College of Osteopathic Medicine joined the US Navy, and later saw action in the Afghanistan theater.

Conley is married to a doctor, Kristin, and they live in Virginia and have three children. The children’s names indicate a love of Irish identity, Padraig (Irish for Patrick), Garrett, and a daughter Emily.

Kristin was selected as “Working Mother of the Year “, in 2016, and told the Working Mother publication that she joined the Navy for the love “of my husband and my country.” She told the magazine back then that Bon Secours the local hospital where she works was a perfect fit.

“It’s allowed me to be active in the community with my kids and to advance my career from a clinical standpoint," she said, adding, "[I have been able to] train in obesity medicine.”

Sean Conley took over as White House physician in 2018. His main expertise is in emergency room medicine and he had a stellar reputation before becoming the White House doctor.

In Afghanistan, he was cited for bravery by the Romanian government after six Romanian soldiers were in close proximity when a roadside bomb exploded and Conley and his team saved five of the six badly injured men.

The question was asked when he was appointed as to what is the difference between an osteopath and an MD.

The New York Times notes: “Doctors of osteopathic medicine, or DOs, are fully licensed physicians, according to the American Osteopathic Association. Their training is similar to that of traditional medical doctors but differs in that they are trained to look at the body and its care holistically rather than just prescribing medicine for specific symptoms or illnesses.”

Conley is now undergoing a test by fire and already highly criticized for giving incorrect information or not revealing the full facts. He has a tough time ahead with his famous patient.