Irish immigration activists braved the frigid Chicago cold this weekend to hold a rally in solidarity with immigrants and refugee. 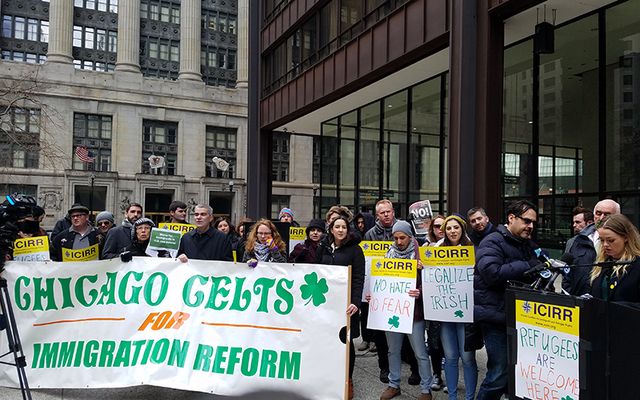 Irish immigration activists braved the frigid Chicago cold this weekend to hold a rally in solidarity with immigrants and refugee. Breandán Magee

Senator Lawless echoed the Taoiseach’s sentiments at the rally adding, “St Patrick himself was an immigrant to Ireland - called to a strange land with nothing but faith and a burning desire to improve his adopted country for all who lived there.  His story is not that different to the stories of millions of immigrants, including the Irish, who have made America their home over the centuries”.

He was joined at the podium by US Senator Dick Durbin (D-IL) who added “We are a country that is not afraid of diversity but celebrates it … throughout history many religious minorities have faced discrimination; it wasn’t that long ago that it was the Irish and the Catholics.  Today the signs may not say Irish Need Not Apply but the orders signed by the president read No Refugees No Muslims”

Cook County Commissioner Bridget Gainer, herself the granddaughter of an Irish immigrant, added “you can’t honor the legacy of your ancestors who came over during the Famine and then turn your back on those who are doing it for the same reasons today”.

Fiona Mc Entee, a Chicago-based immigration attorney from Dublin and a co-founder of the rally, talked about her experience volunteering with 1400 other lawyers at O’Hare Airport.  She headed straight for the international terminal once news of the first travel ban broke weeks ago.

“During the St. Patrick’s season, we wanted to show solidarity with other nationalities battling the same issues of immigration that the Irish faced just a few generations ago” said Mc Entee.

The event ended with an emotive guitar rendition of Annie Moore, the first Irish immigrant who passed through Ellis Island in 1882.  There was barely a dry eye in the house before the crowd erupted into singing “This land is my land, this land is your land”.

Chicago’s Irish community have been at the forefront of immigration advocacy in Illinois and continue to punch above their weight in pushing for pro-immigrant legislation at the local and national level.

Breandán Magee, a rally organizer and activist with the Chicago Celts for Immigration Reform stated, “We remember our past and where we came from, so it’s no surprise that the Irish were leaders in passing Chicago’s Welcoming City policy and were instrumental in passing the Illinois Temporary Visitors Driver’s License Law that has allowed 250,000 immigrants to get licenses and get insured”.

The recent executive orders seemed to have hit a nerve with the Irish community and have lit the fuse of intense street activism not seen in Chicago for many years.  As threats of increased interior enforcement and mass deportations surface, the 50,000 Irish undocumented living in the USA face a daunting future.  Their trepidation, however, seems to be matched by something only too familiar to the Irish: resistance.