Judge Brett Kavanaugh - the Catholic take over of the Supreme Court

John F Kennedy may have been the only Catholic who became President of the United States but they've certainly made their presence felt in the judicial branch. 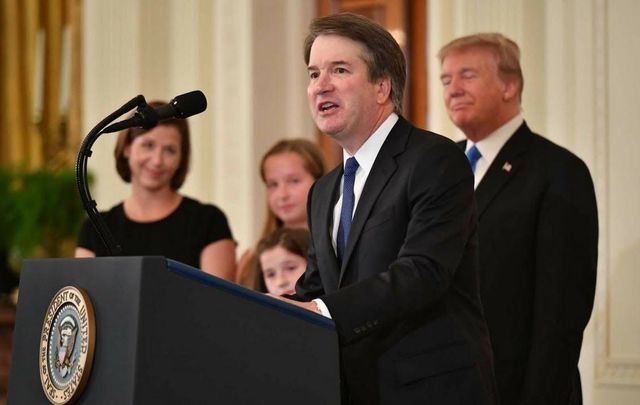 John F Kennedy may have been the only Catholic who became President of the United States but they've certainly made their presence felt in the judicial branch.

Catholic on the United States Supreme Court were once as rare as hen’s teeth. Now with President Trump’s appointment of Brett Kavanaugh, the number on the current court will swell to six in terms of Catholic upbringing if his nomination is approved.

Only one Catholic may have made it to the presidency, but in the judicial branch there influence now is everywhere.

Time was when evangelicals would have recoiled at the very idea of a Taig rising to the highest court in the land.

When Al Smith was running for president as the first Catholic with a real chance, the Protestant denominations ran a vicious campaign of innuendo and hate between them at him.

They held as doctrine the ridiculous rumor that Smith had pledged to the Pope that a tunnel would be built from the White House to the Vatican, an engineering feat that if accomplished would surely have been the greatest in world history.

The Pope, of course, was still the anti-Christ when John F. Kennedy was running for office in 1960, and disapproval of Kennedy was a badge of honor in the evangelical community.  The saintly Billy Graham even attended a secret conference in Europe of evangelical leaders discussing ways to halt Kennedy.

Even in relatively recent times anti-Catholic prejudice was intense. When Supreme Court Justice William Brennan was appointed by President Eisenhower in 1956 he faced a barrage of questions about whether his fealty was to the Pope’s teachings of the American constitution.

In Kavanaugh’s selection, there were still echoes of the old abuse. The Washington Post headline on Monday read: “Judge Brett Kavanaugh -- a Catholic -- faces a historical struggle between canon and constitutional law.”

Really? If he was a Protestant would he face equal questions about his loyalty to Martin Luther’s 95 theses?  Of course not.

Catholics too are perfectly able to choose between Canon Law and the Constitution. As Brennan eloquently remarked, “My answer to the question is categorically that in everything I have ever done, in every office I have held in my life or that I shall ever do in the future, what shall control me is the oath that I took to support the Constitution and laws of the United States.”

Kennedy gave the same retort when he was running. Poor Al Smith, burdened down by the ultimate fake news tunnel to the Vatican, failed to have his voice heard and went down to a crushing defeat.

It is still debatable why the presidency, with the exception of Kennedy and Barack Obama, remains the provenance of wealthy, white, WASP males.

Little seems to have changed in that regard. It may happen in 2020 were, say, Joe Biden to succeed in replacing Trump, or in 2024 when Mike Pence and perhaps Congressman Joe Kennedy are possible runners.

The Supreme Court is a totally different matter, as Catholics for some reason have come to dominate. Whether that slowly begins to seep into the presidential branch remains to be seen, though given the demographics we might see a Hispanic Catholic as the successor to JFK.

Here is the White House video of Kavanaugh's appointment: