The medal is awarded to a Catholic of Irish birth or descent who is outstanding in their field. 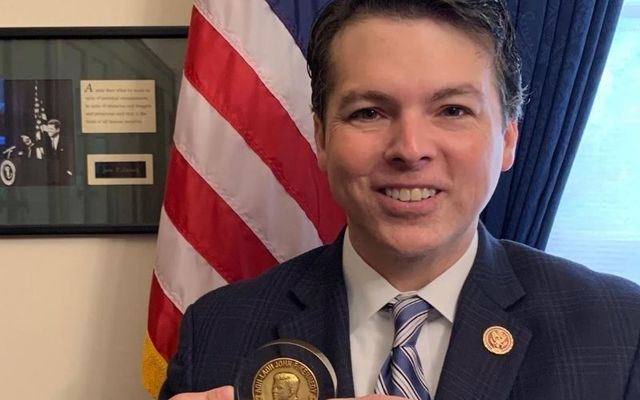 Brendan Boyle is the first Pennsylvania Congressman to win the prestigious award. Ancient Order of Hibernians

The Ancient Order of Hibernians (AOH) has awarded Pennsylvania Congressman Brendan F. Boyle with the prestigious John F. Kennedy Memorial Medal for 2020, the highest honor that the Hibernians bestow.

The national chapter of the AOH and the Ladies Ancient Order of Hibernians (LAOH) presented Boyle with the award, making him the first Pennsylvania-based member of the House of Representatives to receive the medal.

Boyle said that he was humbled by the award, and pointed to his work preventing a hard border in Northern Ireland during Brexit negotiations, his work helping undocumented Irish Americans and his work honoring the 1916 Rising on Capitol grounds.

"I am truly humbled and honored to accept this prestigious award", said Boyle. "I would like to thank the national Ancient Order of Hibernians for this special recognition. From my first day in the halls of Congress, I have made it a priority to use my position to address Irish-American issues and to further the U.S.-Ireland relationship.

"I am particularly proud of our tireless work in preventing the re-imposition of a hard border on the island of Ireland in the wake of Brexit, helping the undocumented Irish in America and honoring the 1916 Easter Rising centennial with a permanent memorial on Capitol grounds. I look forward to continuing this important work."

During the virtual award presentation via Zoom, AOH President Judge James McKay spoke of Congressman Boyle's work on maintaining the Good Friday agreement amid Brexit, securing funding for the International Fund for Ireland, and his dedication to Irish immigration.

"Brendan is a true leader who recognizes the role Irish America played in building our country, and the importance of the special relationship shared by the United States and Ireland," said Judge McKay.

The John F. Kennedy Memorial Medal and Fund Committee was established following the 1964 Albany, New York National Convention to honor the memory America's 35th President, who was a member of AOH Division 14, Watertown, MA from 1947 until his assassination on November 22, 1963.