Bernie Sanders confesses his love for Ireland to Maureen Dowd

Though Jewish with no Irish roots, Sanders revealed an affection for his wife Jane's ancestral homeland. 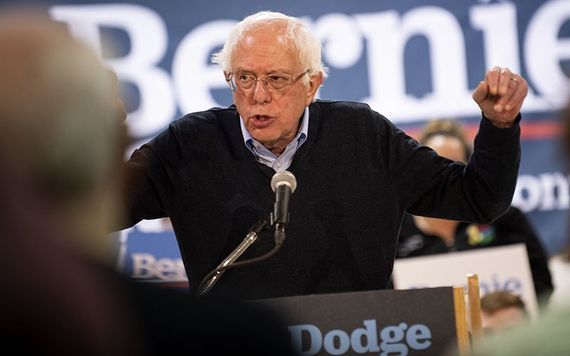 US Senator and former presidential candidate Bernie Sanders has revealed his love for Ireland in a recent interview with New York Times columnist Maureen Dowd.

Dowd was speaking to Sanders about his $6 trillion budget reconciliation proposal that would expand the scope of Medicare and lower the cost of prescription drugs.

Though Jewish with no Irish roots, Sanders revealed an affection for his wife Jane's ancestral homeland.

"It's a beautiful country. We met the President there (Michael D. Higgins).  Beautiful. It reminds me of Vermont," Sanders told Dowd.

Sanders said that his wife was deeply interested in her Irish heritage and that she had traced her roots back to County Cork.

"She is into genealogy big time and when we were in Ireland, the genealogists, they were very, very kind and they gave her a stone from her (ancestral county)."

Sanders, who lost out to Joe Biden in last year's Democratic Presidential Primaries, revealed his close ties to the President in the interview with Dowd for her Sunday column.

While the two politicians disagree on a number of issues, Sanders said that he shares a mutual respect with the President. He said that he enjoys easy access to the White House and that he enjoys a far friendlier relationship than he did with 2016 presidential candidate Hillary Clinton.

Sanders said that he gives Biden a lot of credit for looking beyond the numbers of his $6 trillion budget reconciliation proposal. He said that the President looked at the budget as a chance to reshape American identity.

Sanders said that he would not support a $2 trillion or $3 trillion reconciliation package, stating that it's "much too low".

The Vermont Senator talked about his newfound key role in the Establishment and addressed criticisms from the progressive wing in the House of Representatives, who argue that he is not tough enough on Biden.

Sanders said that he would have loved the opportunity to run against former President Donald Trump, who he described as a "fraud and a phony".

Although Trump was defeated in last November's election, Sanders believes that American democracy is still in danger and that Democrats must speak to the concerns of the white working-class.

"It’s absolutely imperative if democracy is to survive that we do everything that we can to say, ‘Yes, we hear your pain and we are going to respond to your needs.’ That’s really what this is about. If we don’t do that, I fear very much that conspiracy theories and big lies and the drift toward authoritarianism is going to continue."