No winners in Belfast rape trial

Despite all the #IBelieveHer support this woman will be a subject of comment and speculation for years to come, just like the accused Paddy Jackson and Stuart Olding. 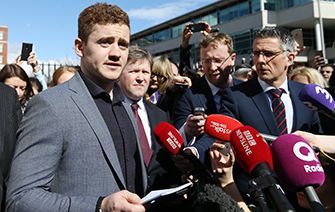 Despite all the #IBelieveHer support this woman will be a subject of comment and speculation for years to come, just like the accused Paddy Jackson and Stuart Olding.

If rugby stars Paddy Jackson and Stuart Olding thought that being found not guilty in the Belfast rugby rape trial last week ended the matter for them, they were very much mistaken.

The reaction to the verdict throughout Ireland since then has been extraordinary.  After the sensational eight-week trial finished last week there were rallies attended by thousands of people in cities north and south in support of the woman.  Social media exploded in outrage, much of it under the hashtag #IBelieveHer which instantly went viral.

When Jackson's lawyers threatened to sue anyone posting defamatory comments about their client a new hashtag, #SueMePaddy, appeared and also went viral with hundreds of people piling in to say exactly what they thought of him.  Much of it was highly abusive.   All of it was a rejection of the not guilty verdict as proof that Jackson and Olding were innocent.

The level of emotion and anger across the country about the case over the past week has been unprecedented.   Coincidentally last week there was another rape trial in progress in the same courthouse in Belfast. 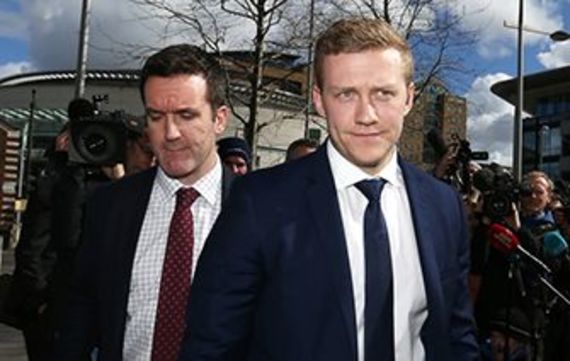 In Dublin last week a trial was underway involving two brothers who had raped their sister over several years.  Neither got any attention.  And there have been many other rape cases here on both sides of the border in recent years which have been far more disturbing than the Belfast case, but none was followed by a storm of public protest like this one.

So why the difference?  First, it was because Jackson and Olding are minor celebrities, playing rugby for Ulster and Ireland. Second, because of the salacious details that were exposed in the evidence during the lengthy trial. And third, because of the foul social media messages between the accused and their friends on the day after the alleged rape which were also revealed in the trial.

These messages -- with references to spit roasting, sluts, top shaggers, etc. -- were disgusting and misogynistic.  But the defense claimed they were no more than exaggerated boasting between the men and their friends and, most important, did not prove whether or not the sex had been consensual.

Revolting though the messaging was, it is unlikely that it was the first time such texting has taken place between lads (and ladettes) after a night of partying, commenting on who did what to whom, sexual prowess, etc.  Like it or not, this is not uncommon in today's social media connected world.

It was concerning last week that most of the public outcry and online reaction seems to have been based on revulsion at the offensive messages.  It was also concerning that the not guilty decision of the jury was being dismissed as though it did not matter.

If you’re not angry, you’re not paying attention. #IBelieveHer pic.twitter.com/kNkG5Gm8h9

Of course there is a difference between being innocent and being found not guilty because the jury has to be certain "beyond reasonable doubt" before they can convict.   But this jury -- eight men and three women (with a woman as jury foreperson) -- had sat through the eight week trial and heard all the evidence.

Most of the protestors were basing their outrage on media reporting, probably had not read everything every day, and probably had concentrated most on the parts that fitted their pre-conceptions.

As the reaction to the verdict rose to fever pitch last week, some of it appeared to be based not on evidence at all but simply on a gut feeling that this was the way some privileged young men who play rugby behave.  A few media commentators expanded on this with accusations that the culture in exclusive rugby-playing schools is to blame.

These commentators all included the line that they accepted and respected the not guilty verdict.  But then they immediately began to discuss the case as though the four (Jackson, Olding, and two friends who had been charged with lesser offenses) had been found guilty.

Whatever your view on the case and its outcome, clearly this -- and the wider reaction to the verdict -- undermines the law, the courts and the judicial system. Why bother with courts and trials at all if someone can be convicted on social media?

At the heart of this case -- as is so often the way in rape trials -- was the question of consent.  It is a notoriously difficult one for juries, particularly in cases where there is little or no evidence of violence.

It is one thing when a woman is attacked and raped on a dark street while walking home late at night.  It is another thing altogether -- as in this case -- when the young woman in question went to a house party and followed one of the men she claims raped her upstairs.  She did not call for help at any point and there was no evidence of violence.

Jackson and Olding said in evidence that the sex was consensual and that she was a willing participant in what happened.  She claims that she was forced and that it was rape.  As already stated, this is very difficult for a jury which must be convinced beyond reasonable doubt before they can find the accused guilty.

Were they guilty?  Or did the woman willingly take part and then change her mind either during the sex or immediately afterwards?

A woman has the right to say no at any point before or during sex, and failure to accept that amounts to rape.  The only people who really know what happened in this case are those who were involved and even their recollections may not be perfect, given the large amount of alcohol that had been consumed on the night.  (The men had huge quantities of alcohol, the woman had a large glass and a half of wine and three double vodkas.)

Olding commented after the trial that, even though he did not believe he had done anything wrong, he recognized that the woman's perception of the events that night could be different.  It is quite possible that the men genuinely believed what happened in the bedroom was consensual and the young woman genuinely believed it was not.

The events of that night were gone over in extraordinary detail during the eight-week trial.  Lengthy reports on this can be found online, particularly on newspaper websites like Independent.ie.  There is not enough space here to rehearse all the detail, but the full accounts are worth reading.

This was a clear chance for the complainant to ask for help.  But instead of doing so she turned her head away. In court it was suggested that she did this because she was concerned that pictures might be taken of her taking part in group sex which could end up on social media.

The woman explained this failure to seek help by saying that she had frozen in shock at what was happening to her.   We know from experts who deal with rape cases that this often happens to victims.

It is easy to understand in cases where violence has been used during the rape and a woman may be in fear of her life. But it may have been more difficult for the jury to fully accept in this case.  As one of the lawyers said, there were three young women downstairs who would have responded to any protest or cry for help.

The medical evidence was also difficult. Jackson and Olding said she had performed oral sex on both of them and that it was consensual.  Jackson said he had penetrated her digitally but said there was no penile penetration because he did not have a condom which he said she had requested.

The most critical medical evidence was that she was bleeding and that she had a small vaginal tear when she was examined a day later by a rape clinic doctor.  But that doctor and a doctor for the defense who both gave evidence at the trial said it was not possible to know whether this bleeding was due to menstruation or a vaginal laceration.

Both doctors agreed the laceration did not prove penile penetration or a lack of consent.  The DNA evidence also did not support her claim of vaginal rape.

In short, although blood had been seen on the woman's white jeans after the party, the medical evidence in court may not have been conclusive enough for the jury in assessing whether she had been raped.

There were some other aspects to the case that may have concerned the jury, like the fact that her phone had been left beside Jackson's bed and that she had gone back upstairs to get her bag.

There were also worrying inconsistencies in the accounts of the accused.  At the very least it was clear from all the evidence that they had behaved in a manner that showed scant regard for the young woman.

But none of these inconsistencies were conclusive proof of rape.  Viewed unemotionally and objectively, it is not a surprise that the jury refused to convict. Whatever they may have felt about the events of that night and the behavior of the men, there was still a reasonable doubt about whether a rape had taken place.

Rape cases are always difficult.   In this case one has to wonder about the advice given to the complainant by the Prosecution Service.

Even if they were convinced that she was telling the truth and she wanted the case to go ahead, the real issue was whether it was winnable.  It seemed clear to many lawyers from the start that the chances of failure were high.

There have been no winners in this awful case.  Jackson and Olding may have been found not guilty but their careers and their lives have been ruined.

The identity of the complainant, although known to many young people in Belfast, is secret and is protected by law.  No pictures of her have appeared in the media.

That is in sharp contrast to the accused who have had their pictures all over the papers and TV news for the eight weeks of the trial.  For years to come they will be pointed at and commented on wherever they go, not just in Ireland but internationally.

There will be no escape from this, despite being found not guilty.  And given the huge level of negative publicity, it seems unlikely they will be allowed to resume their rugby careers, at least in Ireland.

This case turned into something of a circus, with voyeurs crowding the public gallery, which is of benefit to no one. The accused in rape cases in the south, like the complainant, remain anonymous unless they are found guilty and the public are excluded from rape trials. After this case, there is a strong argument that the same needs to happen in the North (and the rest of the U.K.)

The young woman in this case was articulate, determined and convincing during the grueling week she spent in the witness box being grilled by the defense lawyers.  The failure to provide her with her own lawyer, rather than depending on the prosecution lawyer to speak up for her, was a disgrace.  In the end the case had to be decided by the jury on the evidence and it did not turn out well for her.

Despite all the #IBelieveHer support, she will be a subject of comment and speculation for years to come, just like the accused. As we said, there are no winners in this sad business.